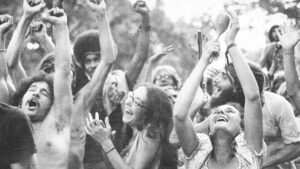 Between the 1950s and ’60s, a peculiar phenomena gripped the American youth like never before. Left disillusioned by the state, societal structures and materialism, young Americans took to streets, in defiance of the standardised narrative in American society.

Beaten down by the conformist state, the bohemian Beat generation experimented frequently with psychedelic drugs, giving birth to a hippie non-conformist counter-culture driven by hedonistic desires.

And when four young men in their 20’s, looking for new opportunities in the August of 1969, organised a three-day music festival–The Woodstock Festival– many thought it’d just be one of those regular Rock n Roll concerts involving, lots of sex and lot more drugs.

The days were fixed between 15 August – 17 August, and traditionally remained so. Tickets were sold as cheap as $7 for one day and $18 for three days. However when the dates came closer, more than 200,000 hippies from varying backgrounds flocked the gates of the festival which was planned for only around 50,000 people.

What happened next was true to hippie culture – the gates were opened to all, making Woodstock the largest free musical event. Perhaps for the hippies love of Rock n Roll that Woodstock also came to be known as Three Days of Peace and Music.

Here’s a list of the five most popular performances from August1969.

The Who hadn’t released an album in over a year and unwillingly signed up for a performance. They were scheduled to perform on 16 August 1969 but ended up performing at around 5 am on 17 August.

Young was fresh on board when the band performed at Woodstock, without actually having a fair idea about the festival. The huge crowd intimidated the quartet so much that Stills say, “This is only the second time we’ve performed in front of people. We’re scared shitless.” Needless to say, the performance boosted opportunities for CSNY. They also put up a great live performance of one of their iconic songs, Judy Blue Eyes.

Jimi Hendrix was the highest paid musician to play in the Woodstock Festival. He died a year later. Hendrix chose to wait for the massive audience to thin down before performing, as he disliked performing for big audiences.

It is said that Janis Joplin waited 10 hours backstage before performing, using the opportunity to do heroine shots. By the time she was on stage to perform, she was massively intoxicated. Despite finding it hard to dance, she rocked the audience.

Santana was an unknown band when it first performed at the Woodstock. But their performance was one of the breakout moments in the festival. Later that month, they released their debut album, which ranked at number 4 on the US Billboard 200 pop chart.