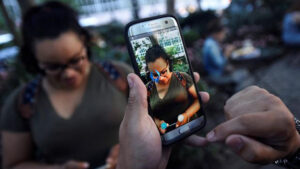 One can’t deny that it’s become a global craze.

And now, it has made its way onto the US presidential campaign.

The smartphone game of Pokemon Go is now being channelised by both the major candidates to appeal to voters.

Democratic candidate Hillary Clinton talked about her wish to use the app to lure voters in a campaign address last week.

I don’t know who created ‘Pokemon Go,’ but I’ve tried to figure out how we get them to have Pokemon Go to the polls.

Staff members of Clinton’s campaign have been cruising the streets looking for Pokemon hunters, hoping to divert their attention for the few minutes it takes to register to vote.

At an event in Ohio, they urged people to come to its “lure module” – a feature that brings more Pokemon to a given location – to “get free Pokemon” and “learn more about Hillary Clinton!”.

Clinton’s Republican rival, Donald Trump, too has been making efforts to use the game’s popularity. He recently posted a Facebook satire video called “Crooked Hillary No” that shows Clinton as a Pokemon, who gets captured by the Pokeball.

How an Enterprise App Can Benefit Your Business