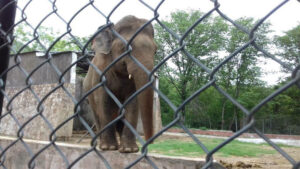 Kaavan is an Asian elephant who has been in captivity for nearly 30 years in the Murghazar Zoo in Islamabad. And after thousands of people all over the world campaigned for his release, he has been freed and will find his new home in a sanctuary. The ‘Free Kaavan’ campaign caused ripples worldwide and was backed by singer Cher.

The elephant began showing signs of depression which were noticed by Samar Khan during a visit to Islamabad. According to her, Kaavan was bobbing his head repetitively; a behaviour known as ‘weaving’ which is adopted in response to stress and depression. Shortly after, she started a petition to free him.

According to experts, the chained-up elephant suffered from a ‘mental illness’ after years in isolation. Recently, the senate ordered the Murghazar Zoo to move the elephant to a sanctuary, where he could be among other elephants.

However, final approval from Pakistan’s National Assembly is awaited before his move to Myanmar.

I wrote Kaavan’s petition nearly a year ago with the hopes of just getting Kaavan’s story out there. I didn’t know what to expect, and was astounded to see over 400,000 passionate animal lovers take up the cause with us and make this into such a powerful movement. This has been an uphill battle from the start and all the support we have gotten from each of you ele-friends (sic) is what got us through to this point.

Kaavan had been at the zoo since he was a baby and was brought to the enclosure in 1985 from Sri Lanka. Due to his mental illness, he is said to have become increasingly violent. The campaign to free him was spearheaded by two groups; Free Kaavan and Help Welfare Organization.

Kaavan, an Asian elephant in captivity for around thirty years, will now be shifted to a sanctuary in Myanmar. (Photo Free Kaavan/Facebook)

(With inputs from Express UK)

Why Should I Care about Typography Exactly?