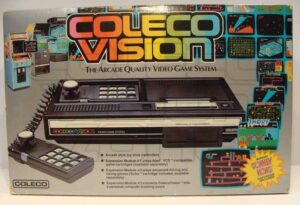 E3 officially kicks off tomorrow but a number of companies like Microsoft, Bethesda and Sony are already staging pre-event events highlighting new gaming hardware and software.

I’ve been to a number of E3 conferences over the years beginning back when the event hosts were still struggling to figure out exactly what was going on. In the first few years they only gave out a few press passes and actually turned away reporters who wanted to attend – a move that confused just about everyone since we all know that just about any publicity is good publicity.

It’s a fun event. Lots of excitement, flashing lights, blasting music, glowing screens and of course lots of booth bunnies dressed up like warrior princesses. I haven’t been to an E3 event in years but I might go again sometime.

In the late 70’s you basically had two types of game platforms – arcade machines (that decimated the pinball machine business) and game consoles like the Magnavox Odyssey, Bally Astrocade, ColecoVision and Atari Pong for the home. The early 80’s saw a boom in the console market and the cartridge games that ran on them.

While it was expensive to develop and manufacture console game cartridges (investment costs to produce a single title could easily run into the millions of dollars) there were also millions of dollars to be made if you had a hit title. By 1982 it was estimated that the video arcade industry was generating over $8 billion a year and home video gaming was generating over $3.8 billion a year.

But the late 70’s also saw the arrival of the first home computers and with them came the early text-based adventure games. Even though these early PC games weren’t even close to console games when it came to graphics or sound they were cheaper to produce since they didn’t require expensve development gear, you didn’t have to pay expensive licensing fees and they were disk-based rather than cartridge-based.

Then in the early 80’s PC manufacturers like Commodore, RadioShack, Atari and Texas Instruments began a full-scale price war and by 1982 you could get a home computer for the same price as a game console – only a computer could do much more than just play games (and the games were cheaper).

By 1983 sales of arcade machines, dedicated console devices and the games that ran on them went into a tailspin. The market was saturated and quite confused. Console manufacturers began going bankrupt and right behind them game manufacturers began folding right and left. Since PC game revenues were so small compared to arcade and console revenues everyone said that the gaming industry in the U.S. was basically dead. Investors began avoiding anything even remotely game related.

By the late 80’s once the PC market began to settle down and computers began to ship with better and better graphics capabilities the games market began to pick up again. But from 1982 to 1985 the game industry in the U.S. was officially dead.

It wasn’t until the mid-90’s that consoles really began to come back and today, judging by how popular E3 has become, we have a healthy market again.