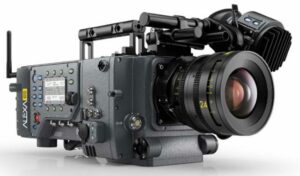 While Star Wars has helped push through many technological advances in movies, the for the next two movies in the current trilogy, they will be shot on celluloid, which these days is a dying technology.

As for the Star Wars spin-off movie, that’s another story. According to Collider, Star Wars Rogue One will shoot on the hottest new digital camera there is, the Arri Alexa 65, which is considered a “large format” camera. Think of a large frame 65mm camera, and this is it in digital.

Apparently the entire movie won’t be shot with this camera, but certain segments will indeed be shot with it. A lot of other upcoming movies will be using this camera, including the new Mission: Impossible, along with Captain America: Civil War, and Avengers: Infinity War.

These days a lot of directors and cinematographers feel that digital is not only as good as film, but that the latest in digital technology has passed celluloid. What’s now great about the Star Wars movies is we’ll get the best of both worlds with celluloid, as well as the latest in hi-def.

Doctor Strange Has Its Villain

On the eve of E3: remembering a time when the games industry almost died