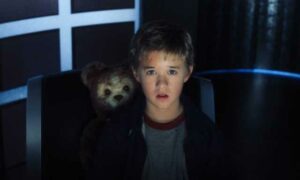 There have been a number of stories today about recently revealed patents filed by Google depicting cute, cuddly stuffed toys that when activated will turn their heads to look at you and follow your IoT commands.

So you walk into a room and say ‘hello, Teddy’ the stuffed animal on the shelf turns it’s head to look at you and says, ‘hello Stan. What can I do for you?’ ‘Could you turn on the TV, switch the channel to CNN, lower the lights and maybe bump up the thermostat a few degrees? It’s a bit chilly in here.’ It tilts its furry little head and says, ‘I’m sorry. Did you say CNN or C-SPAN?’

Feel a little silly talking to a teddy bear? How about a miniature dragon instead? Or a little storm trooper or a Cthulhu-esque monster with wavy tentacles? A Justin Bieber doll? A Playboy bunny?

Or maybe nothing at all. There have been countless movie and television depictions of people simply talking to their AI-equipped homes or apartments to turn on lights or check their email. Sometimes people give the AIs names. Sometimes they just call it ‘computer.’

Amazon has been selling their Echo, a simple black cylinder Bluetooth speaker/digital home controller hybrid device for a while now and even if it hasn’t broken any sales records it didn’t creep people out either.

But for some reason, people reporting on Google’s anthropomorphic stuffed animal devices find them unsettling.

Part of the reason is they seem to be blatently targeted at kids. And, since IoT devices can be interconnected and linked to the Internet there are concerns that they could be hijacked or hacked like the numerous instances of ‘nanny-cam’ hijackings that have sprung up recently.

And there’s the stink about the new Barbie doll that can hold conversations with kids. Talking dolls have been around for a long time, but this Barbie is connected to the Internet so the voice recognition and AI conversation algorithms can all be done in the cloud rather than trying to cram all that computing power into her svelte plastic body.

People were concerned that their children would be having private conversations with someone or something, somewhere out there on the Internet and who knows what Barbie might be teaching the kids. And perhaps more unsettling was that Barbie would be learning too and sending information about our kids to somebody we didn’t know.

If you think about it, what’s the difference between talking to a disembodied voice in the ceiling or a black cylinder or a polished chrome thermostat and talking to a stuffed rabbit? In our IoT world they’re all connected to the Internet. They all can be hijacked or hacked. They all can gather information about us and use it to customize advertising (or something more nefarious).

But the writers weren’t concerned about the potential dangers of the Google devices being hacked, they were creeped out simply because the toys were a bit too cute. They would be just too easy to like and trust (plus the idea of a truly intelligent toy is also a bit too creepy).

We really are getting to the point where we have to decide what shapes and voices we feel most comfortable with when communicating with our devices. Would we feel safer talking to cuddly, fuzzy anthropomorphic toys or something that doesn’t look alive at all? Do we want stylized, obviously non-human robots or ones that look and sound and act like real people?

Fortunately we’ve got over 100 years of science fiction books, stories, comics, movies and TV shows that have wrestled with questions like these. Maybe Isaac Asimov can still help even from beyond the grave.

Why You NEED To Change Your Marketing Because of News Aggregators

The Churchill Club’s VCs Predict the Death of Automobiles