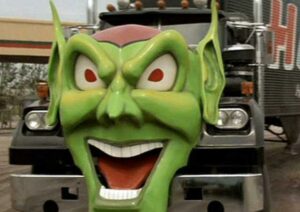 Earlier this week Nevada granted a limited license to Daimler to test their self-driving Freightliner 18-wheeler. Daimler has already been testing the truck in Germany and wants to see how it fares in the U.S.

Before you get freaked out thinking about that Maximum Overdrive movie where self-aware (and self-driving) killer trucks terrorize a group of people trapped at a truck stop, the Freightliner has to have a human driver on board just in case something goes wrong.

Of course, I’m not sure how effective that backup plan would be if you’re relying on a napping driver to jump in and take control. I can easily picture that driver constantly watching the road for the first few hours, then glancing at the road every once in a while, then making a few phone calls and checking their Facebook page, etc. And before you know it they aren’t paying attention at all.

I can also totally see a day when once you get on the highway to go to or from work you flip the switch and let the car get you where you are going. But Tesla’s concept of a driverless car that doesn’t even have a steering wheel is probably going a bit too far for most folks. And I don’t see people buying into the idea that they enter a destination in Google Maps, press a button, curl up for a nice nap and let the car get them where they are going.

That’s going to come a bit more slowly, but we are getting there.

Self-parking cars have been around for a few years and people seem to be accepting that (although I believe that’s mainly because most people find parallel parking to be such a pain in the ass that they would rather turn over control to an automated system than park the car themselves).

And we’ve had self-driving people movers circling around airport terminals for years. People don’t even notice any more. Atlanta airport’s Plane Train carried 64 million riders in 2002 and no one seemed to mind that it didn’t have a human driver and the Robert N. Broadbent Las Vegas Monorail has been zipping along since 2004 without drivers either.

People seem to be perfectly willing to trust their lives to an autonomous train as long as it’s not going very far and it’s on an elevated track with no other traffic to worry about.

Self-driving conveyances of all sorts have been around for years and while they may have seemed a bit scary at first we gradually accept them. When was the last time you rode in an elevator that had a human operator?

But people are still wary of things like self-driving planes. Most people would definitely NOT get on a plane if they knew there was no pilot up front. But the truth is, most modern planes actually can fly and even land themselves without any human intervention at all. No one thinks twice any more when the crew flips on the autopilot and wanders around the cabin during a flight but we still want them in the cockpit during takeoffs and landings (even though pilots are heavily reliant on automated controls even in those situations).

So it’s really a matter of trust, not technology.