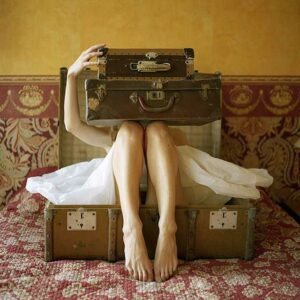 I’ve always wondered why you sometimes saw people on Star Trek toting luggage when they use the transporter to travel on or off the Enterprise. If replicator technology existed, couldn’t you just recreate new versions of everything you might need once you arrived at your destination?

Now you would probably have to own a copy of the original script and either scan it or transport it so that the ship’s computer would have a blueprint to build copies from, but that would probably apply to any unique objects. As for things like clothing, toiletries, cameras or just about anything that most people stuff in their suitcases when they go on trips, a replicator ought to be able to zap those things into existence once you reach your destination with no problem.

But replicators present other logic problems in a Star Trek universe.

Another problem is that if a replicator can replicate 99 percent of everything a person might need then there really isn’t any need for money. And if everyone is essentially free to do whatever they want with their lives without having to worry about money the question becomes, why would anyone take a menial job on a starship? For the prestige, the adventure or perhaps to see the universe?

And since you should be able to use a replicator to replicate the parts to build another replicator they would be virtually free.

But perhaps replicators require a starship-class power source to operate and need more than a solar panel or a 120v plug (or maybe they run on Dilithium crystals). That would make them luxury items that you might only find in a few places like on a starship.

Finally, if, like the teleporter, a replicator can reassemble atoms into just about any configuration then why didn’t they use them to replicate body parts inside patients who were sick or injured? They could have replicated blood, tissue, bone or just about anything that might need fixing. In fact I think there was an episode where they used the transporter records to recreate a sick person’s original chemistry before they got sick (although I think the writers decided that if they could do that nobody on the show would ever have to die which might have taken some of the drama out of subsequent episodes).

Now I’m not a Star Trek expert (I just play one online) so I’m sure there are many hard core Trekies out there who can point out the mistakes in my logic or places in the show where they explained all this.

Cortana pulls 10 of 16 correct picks out of the ether