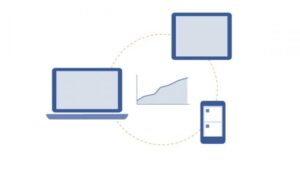 If you place an ad on Facebook you can now see how people are converting even if they are jumping from one device to another and one app to another.

Let’s say, someone sees your ad on a mobile phone while they are picking up a sandwich during their lunch break, but they don’t do anything about it until they are in the office at their desktop. Then, they order from there. Sounds like a normal scenario these days. People not working, ordering crap during work hours and doing fun things on their mobile during their lunch hour.

Facebook, fortunately, has figured you out because it knows everything about you. So, it is going to tell advertisers with a new cross-dervice report where you see an ad and on which device you convert.

Facebook has plenty of information for advertisers already. It offers targeting, delivery and conversion metrics. The data and its application is pretty granular. The Facebook advertiser dashboard is very effective and a much better user experience than Google AdWords, for example.

Ultimately, Facebook is doing a better job than its main competitor, Google, in providing a better UI and UX for advertisers. It is not doing anything in terms of identifying tracking mechanisms that someone else hasn’t thought of – we all know that mobile is changing everything – Facebook is just doing it in a slicker, and more modern manner.

NSA’s MonsterMind: Is it too late to curb the NSA?