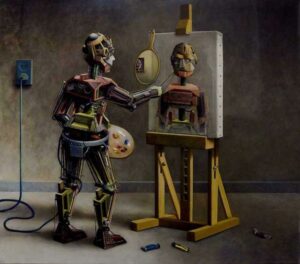 Normally, as the last visitors file out of London’s Tate Britain and the gallery doors shut, the halls of artwork are enveloped in peaceful silence. A new project, however, is set to change that.

Nocturnal robots are being given the run of the Tate Britain museum as part of a unique experiment that will allow art lovers to explore the gallery after visiting hours have technically ended.

From Tuesday, four remote-controlled robots will be switched on and set free to ramble through halls containing 500 years of British art.

Most intruigingly, these robots will not be on a random path. Instead, virtual visitors can control the bots through the Tate’s “After Dark” website. Here each machine will live-stream footage of the gallery that users have chosen to explore themselves.

For a truly educational experience, if a user manages to steer the robot to a piece of art they are particularly interested in, a team of art experts will be on hand in real-time to provide live commentary on the website.

The project came about as a result of the £70,000 IK Prize where inventors were challenged to find innovative new ways to encourage digital integration in the Tate Britain.

Other ideas that came close to fruition included a plan to make virtual versions of works of art in a Minecraft-esque block building game, and to broadcast artwork stories over social networks.

While the developers of the robot scheme say this is the perfect way to explore the museum in real time, they encourage those who want to appreciate Hogarth and Bomberg in high-definition to strap on their shoes and visit the Tate Britain the old fashioned way.