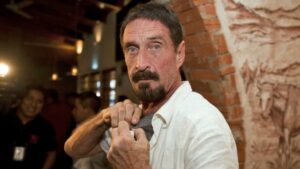 God, we love DefCon, the world’s largest gathering of hackers and people who just like to tell you how everything connected to the Internet is one hack away from bringing about the end of times.

It seems that it is now part of what may be John McAfee’s salvation tour. McAfee pioneered anti-virus software founding his eponymous company in 1987. He then sold it for billions of dollars to Intel, and then decided to other things. Some of them raised a few eyebrows, but he got to go shirtless in paradise and hang around with women of ill repute or something like that. He is a billionaire so, what does he care what people think.

In fact, in 2012, McAfee was accused of killing is neighbor in Belize. He denied the charges and fled the country, and was a mite paranoid over the whole matter.

Well, apparently, people may start caring what he thinks because John has decided to channel his bile and outlaw ways into something positive. It is called Brownlist, and it says, It’s payback time!

The site is a place for people to complain about problems with companies and to have the community come up with an appropriate response. Yes, it sounds like an online kangaroo court, but McAfee believes that it is a positive way to channel our rage against the man.

At DefCon, McAfee told the assembled hacking community that he wants to make a stand against companies that get our highly personal information and are too lazy to manage their intrusions into our privacy.

McAfee is raising the banner through Brownlist. He claims that it is funded with about $450,000 from an unnamed investor and that he is looking to raise more money for it.

Enterprise security is more than just one moment in time