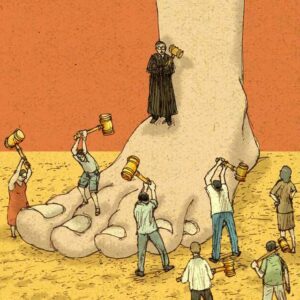 Twenty-six year old law student Max Schrems has filed yet another lawsuit against Facebook, this time it’s about Facebook helping the NSA spy on users.

Schrems filed the class-action lawsuit in an Austrian commercial court, alleging a series of privacy violations, including aiding the NSA in the PRISM surveillance program revealed by Edward Snowden, and requesting 500 euros (around $670) of damages per user.

“We want to show to the U.S. industry that they have to respect [European] fundamental rights if they want to do business in Europe,” Schrems said in an interview. “We love the technology, but we want to be able to use things without permanent worry for our privacy. Right now you have two options: live like in the stone age, or take action. We decided for the second.”

Schrems also claims Facebook is in violation of European data privacy laws for its “data use policy,” for tracking users on third websites via Like buttons, and for monitoring users through “big data systems,” among others.

Last year Schrems filed a different lawsuit with the Irish Data Protection Commissioner (DPC) for similar PRISM-related isssues. The student also requested that Facebook disclose all the information they had on him: he received a stack of 1,222 pages. In 2012, he also forced Facebook to abandon its photo-tagging suggestion feature in Europe, after he complained that the facial recognition software used for the feature violated people’s privacy.

This latest class-action lawsuit is open to anyone outside the U.S. or Canada and so far at least 100 people have signed on (using their Facebook accounts, of course).

It’s hard to tell whether Schrems is just piling on one lawsuit after another against Facebook in an effort to get money through out of court settlements, whether he is just testing out his newly learned legal chops or whether he is truly trying to take Facebook and the NSA to task for spying on their customers.

Verizon to throttle some subscribers, FCC not pleased

Hey, So You Want to See Something Cool? How about the inside of my home in 3D!