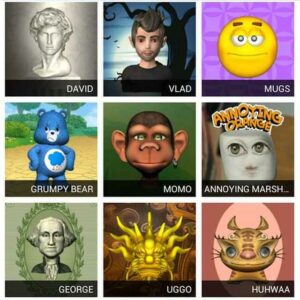 Yesterday Intel announced that they are getting into the messaging world with the release of Pocket Avatars an app that lets you pick a cartoon-like substitute to deliver your messages.

A first reaction to a messaging app from Intel might be raised eyebrows or full-blown skepticism, however the Pocket Avatar app might actually take off.

The app uses a phone’s front-facing camera and microphone to record a short message up to 15 seconds. The app uses sophisticated facial-tracking algorithms to capture the user’s blinks, smiles, mouth and head movements to transform their faces into one of 40 different avatars. After recording, a user can send it to friends within the app itself or share it via text, email, or social media.

“People just don’t know how much software we actually do that’s in the devices you carry that are based on Intel chips,” Mike Bell, general manager of Intel’s New Devices Group, said at a launch event. “So we thought this was a great way to say, ‘Hey, look at the cool stuff we actually do.'”

“This isn’t a one-off, this isn’t a publicity stunt, this is something we’re serious about,” he added. “We’re going to try lots of new businesses like this.”

Intel has partnered with a handful of brands such as Lego and Gumby and Pokey to fill their growing rogue’s gallery of avatars and they aren’t all cute and fuzzy characters designed to appeal to kids. There is an Obama avatar, a George Washington avatar, a Hillary Clinton avatar and a Statue of Liberty avatar (and yes there are dozens of animals and imaginary creatures thrown into the bunch).

I’m not terribly impressed with most new messaging services. For the most part they seem to be focused mainly on one-upping their closest competitors by adding features that may or may not appeal to actual users of the apps. In this case, however, I actually believe that Intel might be onto something.

The app is silly, fun and free (although some select avatars can cost as much as $.99, which is still pretty cheap). It is available for iPhone and Android but since it doesn’t require the receiver of the message to have the app that makes it even better.

Intel may have floundered occasionally when they tried to venture outside of the chip business but they continue to explore new areas and some of their projects, while usually not directed to consumers directly, show that the company wants to leverage their know-how in unique ways.

While Pocket Avatars may be little more than an amusement I honestly think they’ve got a shot here.

Oh no, Yo! Say it ain’t so! Two letter messaging app hacked!