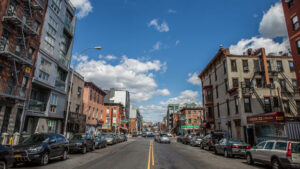 Using the web to find local information is one of the things that endears Yelp over Google, for example, but that’s not what the app Enquire is about. We don’t know about yet another Q&A, social, local app, but the approach is fresh and the design looks good, as it should because it is built by someone with an agency background.

“It’s about getting more human answers when you’re looking for information about your neighborhood,” says Maxime Leroy, CEO and co-founder of Enquire. Leroy, originally from France, saw the need for the app while he was filming a documentary about the sharing economy last year. “As I traveled around Europe and the U.S., at the end of all the interviews I had, from food coops to Airbnb hosts, what stayed with me was seeing that these local communities did not often have the right tools to interact and get to know each other,” Leroy says. He decided to leave his agency job, along with a coworker, and start building an app. After months of prototyping, the team landed on a simple question-and-answer format. “As soon as you put people in a group with others from their neighborhood, they start to ask questions, like where your kids go to school, or what’s the best restaurant that’s not too packed on a Friday night,” Leroy says. “These aren’t answers you can find on Google or Yelp or any place-based website . . . You want a human response.”

Do you have what it takes to be an entrepreneur?