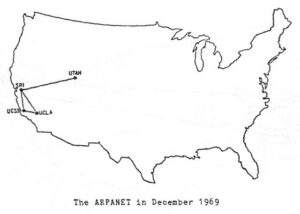 We are just over five years away from the Diamond anniversary of the Internet. The actual basis of the Internet, ARPANET, was formed in 1969. It wasn’t until 1993 that the Internet went truly global and, arguably, the business of the Internet really took on significance when the backbone was privatized in the United States in 1994.

Over at Vox, they have 40 maps that chart the rapid evolution of the network, and take it through the social and economic impact of the network worldwide. It’s a fascinating overview of the impact of the Internet, but as you go through the list of maps, it becomes increasingly clear that the Internet’s activity is also mirroring the social and geopolitical upheavals of the world specially in the way it is managed by certain regimes.

ARPANET, the precursor to the modern internet, was an academic research project funded by the Advanced Research Projects Agency, a branch of the military known for funding ambitious research projects without immediate commercial or military applications. Initially, the network only connected the University of Utah with three research centers in California. ARPANET was a test of a then-novel technology called packet-switching, which breaks data into small “packets” so they can be transmitted efficiently across the network. It also had a more practical goal: allowing more efficient use of expensive computing resources. Computers scientists sometimes used ARPA money to buy computers, and the agency hoped that ARPANET would allow universities to share these expensive resources more efficiently. One of the first ARPANET applications was Telnet, which allowed a researcher at one ARPANET site to log into a computer at another site.

Facebook brings Pryte to the ‘Internet for everyone’ party

Are fitness trackers a $2.2 billion a year market?