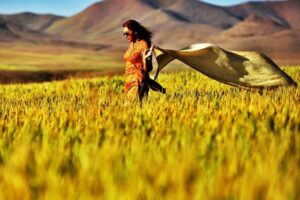 The role of Twitter has been well documented in the Arab Spring uprisings across the Middle East. Now, Facebook is playing a role in helping Iranian women lay claim to their identity and their desire to be free of the strictures of conservative Islamic laws that force them to dress and behave a certain way in public.

Ever since the Islamic Revolution 35 years ago, it has been illegal for a woman to leave the house without wearing a headscarf. The punishment ranges from a fine to imprisonment. “My hair was like a hostage to the government,” says Masih Alinejad, an Iranian political journalist who lives in the UK and who set up the Facebook page. “The government still has a lot of hostages,” she adds.

Alinejad got the idea after she posted some photos of herself without the hijab to her own Facebook page. The images were liked thousands of times. So many women began to send her their own pictures that she decided to set up a dedicated page. Though she’s well-known for being critical of the government in Iran, she insists the page is not political. “These are not women activists, but just ordinary women talking from their hearts.”

Alinejad recently set up Stealthy Freedom, a Facebook page that has 140,000 followers and continues to see women posting pictures of themselves without headscarves.

It is not clear what the Iranian autorities will make of all this. There has been a constant battle between hardline conservatives and a growing cadre of young Iranians who are fed up with the strict rules that govern their social behavior. For many Iranians, Facebook is a haven of free speech and free expression.