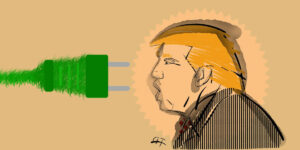 The future leader of the free world Donald J. Trump has concerned environmental scientists with his sweeping statements that indicate that climate change and global warming is a hoax. In his simple terms, President-elect Donald Trump believes that the changes and fluctuations in the Earth’s weather conditions are normal.

Renewable energy is needed, but could suffer serious setbacks under Trump.

Donald Trump has said in interviews that he is interested in a renewable energy solution, however the current solution isn’t working. In a CNN interview, he referenced the flaw with solar panels investment cycle not providing an economic benefit. Without this benefit, it makes it a difficult proposition to sell. And in this case, he was right in saying so.

However, he used an argument against the expansion of wind turbine energy saying that it would kill “all of the birds”, without any facts to back up his claim. For environmentalists, it seems like the only solution that he is promoting is one that promotes carbon emissions; even though he isn’t saying it himself.

Trump’s threat to abandon the Paris Agreement will reverse the progress made on climate change.

Trump made it clear during his presidential campaign that the USA had entered into an unfavourable environmental agreement that would jeopardise the economic ambitions of the country. When he takes office, one of his priorities will be to get the US out of the agreement and propose an alternative agreement that favours his and the US economy’s interests.

The Paris Agreement was a huge step towards combatting carbon emissions and climate change. Several economies from around the world such as China and Australia had implemented measures such as carbon emission caps and government investment into renewable solutions such as energy production and energy-efficient lighting.

Because the US is one of the world’s largest polluters in the world, pulling out of the agreement would severely impact the carbon-emissions cuts other countries around the world are trying to achieve.

Trump’s rhetoric sold the promise of jobs at the cost of the environment.

Donald Trump won the election due to fear-mongering with jobs and immigration. His promise to put, “America First” at the expense of immigrants, gender-bias and logic means that sustainability is likely to be ignored. The only way sustainability will have a chance to factor into Trump’s “America First” plan is if any sustainable practices, processes or technology have an economic benefit. For example, used ink cartridges pose serious environmental problems when they are sent to landfill because it takes between 400 to 1000 years for the plastics and metals within the cartridge to degrade. Furthermore, the used cartridge’s inks contain chemicals that are carcinogens, which can lead to cancer. These chemicals can contaminate the Earth’s ecosystem, agriculture and waterways. What’s more scary is that the cancerous carcinogens will find their way into the food chain and affect the health of people in the future.

There are several organisation around the world that have setup processes to ethically recycle used ink cartridges, however it is an expensive process to implement in first world countries. Many countries make the economic decision to send it abroad to other countries where it contributes to eWaste instead of closing the environmental loop. Should this attitude be encouraged by the Trump administration, it’s likely that this activity will grow.

The fear factor with Donald Trump sabotaging environmental efforts might be warranted, but the rest of the world is watching and its citizens and environmental scientists are hoping that the persona and agenda that he pushed during his agenda will be wrong. Only time will tell, but let’s hope that he gives sustainability a chance.

10 Online Apps to Help You Fight Procrastination while Writing