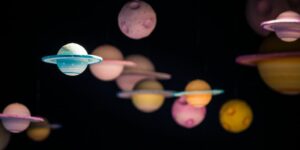 Nasa’s Kepler Space Telescope, using gravitational microlensing, might have found evidence of Earth like planets floating in the universe, that are not orbiting a star.

Our observations pointed an elderly, ailing telescope with blurred vision at one the most densely crowded parts of the sky, where there are already thousands of bright stars that vary in brightness, and thousands of asteroids that skim across our field.

From that cacophony, we try to extract tiny, characteristic brightenings caused by planets, and we only have one chance to see a signal before it’s gone. It’s about as easy as looking for the single blink of a firefly in the middle of a motorway, using only a handheld phone.

“Kepler has achieved what it was never designed to do, in providing further tentative evidence for the existence of a population of Earth-mass, free-floating planets,” said Eamonn Kerins, also from the University of Manchester, who was a co-author on the study.

Researchers believe that these planets were first formed around a star before being thrown out of orbit.

When a star is born, the leftover dust and gas in the cloud from which it formed doesn’t just sit there. It clumps together, forming other cosmic objects – asteroids and comets and meteors and, yes, exoplanets. We’ve detected many of these exoplanets

Scientists using the Kepler telescope have found a new population of rogue planets, or free-floating planets, unconnected to any star.

Huawei And Developing A FUD Defense

Qualcomm teams up with ASUS to release high-end gaming phone