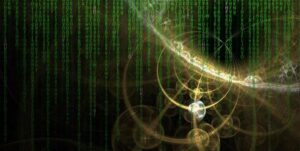 X-ray photons emitted near rotating black holes not only exposed the existence of these phantom-like astrophysical bodies, but also seem to carry hidden quantum messages.

Space-time possesses a very particular shape near spinning black holes. It is curved and twisted. The curvature of the space-time rotates the polarization angle of photons emitted or passing near black hole. The twist of space-time imprints orbital angular momentum to photons. These two degrees of freedom acquired by the photons encode quantum information processes. It can implement quantum gates and quantum circuits like Bell states.

Bell states measure the degree of entanglement in the X-ray photons and are strongly related to the spinning speed of the black holes. It is argued in the recent paper that the faster black hole spins the louder and clearer the quantum message black hole is sending to the vast Universe.

AMD vs. Intel-Assessing Their New Strategies: A Study In Contrasts