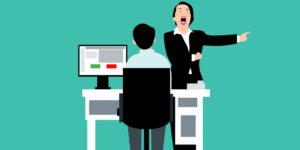 Much of my educational background was in Manpower Management, a now largely discontinued field of study that focused on applying our understanding of people to motivation, company productivity, and employee/company success.

So when it comes to the current Hollywood scuffle compliments of the Oscar ceremonies, it has been fascinating to watch the discussions on who is right: Chris Rock as a comedian exercising his freedom of speech, or Will Smith defending his wife. The answer should be neither. Instead, the discussion should be focused on how to ensure it never happens again. From a workplace perspective, had Chris Rock done that at a company event, it would constitute a hostile workplace. What Will Smith did would be considered workplace violence. At the companies I have worked for, the former might have resulted in termination, and the latter would have certainly had that result. But the real damage was done to the entertainment industry because two of the industry’s top performers exited this event with their reputations crippled by it.

I have seen this a lot at companies. An executive or employee tells a poorly thought-through joke that results in a range of responses from being frozen in grade (never seeing another promotion) to being perp-walked out of the building never to return.

Let us talk about how award ceremonies work and why certain types of humor should be outlawed at awards events.

The power of awards vs. cash or promotions

If you have studied Abraham Maslow or Frederick Herzberg, you know that money does not motivate you well. People will not work harder if they get more money, but if you reduce their income, they will do disproportionately less work. Overpaying anyone, therefore, makes no sense, but correcting salary discrepancies and avoiding salary reductions, which can put you in a death spiral, do. You can motivate with promotions the way my industry does. But when most of the folks in the company have the title “VP” without being qualified to do the job, you have locked them into the industry. They cannot leave the industry without seeming either overqualified for the jobs they can do, or underqualified to keep their organizational level. Going from VP to Director would seem to be a demotion even though, in practice, it is not.

Apple’s practice of removing your title from your record and replacing it with “associate” does much the same thing without turning everyone into a VP, but it comes across as cruel and retaliatory. People with my background are likely to recommend no one go to work for that company, if you have a choice, as a result. Now that this policy is known, it will have an adverse impact on the quality of employees they can recruit going forward. Yes, it proves that you can implement a secret abusive retention practice, but in this connected world, secrets like this are very hard to keep, and if it gets out you do this, you will be open to litigation for damages and people who have a choice of employment are more likely to choose someone else.

Awards, if they are dependable and large enough, can drive productivity. Salespeople work incredibly hard to win a luxury car at the end of the selling season and salespeople already are getting commissions and other financial incentives to sell more. Two bad practices are making the award optional and changing eligibility at the end of the award qualifying period.

One of the large PR firms announced early one year that they would have impressive awards for top performers if the company did well, but if it did not, the awards would be canceled. As a result, few employees took the awards seriously and the program underperformed. At the end of the award period at another company I worked for, the business made anyone that had won the award the prior year ineligible. Given I had worked extra hard to win that award a second time, I went from loyal employee to rebel, and I eventually quit to go off on my own.

To work, awards must be dependable, large enough to be desirable and convey the status that was promised. Otherwise, the person being awarded will lose faith and their performance will decrease and they will be at high risk of acting out or looking for a new job in another company.

Part of what makes awards so effective is the status conveyed. Yet at company award events, it is common for whoever is giving the award to make fun of the recipient. Sometimes the jokes are vanilla, but they can be harsh and cruel, much like Chris Rock’s comments about Will Smith’s wife, Jada Pinkett Smith. The goal of an award event is to value top performers and make other employees in the same field want to be them. This drives up overall performance. If getting the award will result in personal embarrassment, then not only does that weaken the award’s potential for motivation, but it will also make the award undesirable.

If you are going to tell jokes at an event, they should be focused on you and your experiences and you should avoid making fun of others, particularly those being recognized for their exemplary performance.

Wrapping up: A learning experience

I think the Will Smith/Chris Rock dust-up could be a good learning experience. It reminds us that violence at the workplace is unacceptable regardless of who does it, but it also reminds us that a poorly considered joke can have serious consequences. We live in an age where a lot of people seem to think that they can say anything. That has never been the case. Jokes are incredibly dangerous, and given the Oscars are designed to drive actors to higher performance, making fun of them on stage at the event is counterproductive and was bound to result in someone going off the rails.

The lesson you should walk away with is that awards do work to increase performance, but you can destroy the effectiveness of those awards if they are not reliably given or if you embarrass the winners when the awards are given. Awards event talent should be focused like a laser on making the award recipients larger than life and enviable so that others emulate their top-performing behavior. Most of the Oscar presenters did exactly that, but Rock did not and did substantial damage as a result to his and Will Smith’s careers, and to the Oscars in general. Make sure you and your people learn this lesson or it is likely to come back to haunt you with a series of painful repercussions. It is sad that the one great example, where Lady Gaga had Liza Minnelli’s back, was overwhelmed by the bad examples of Chris Rock and Will Smith. But that also shows that a mistake will always overwhelm any good news.

Awards are given for a reason. Not understanding that can completely undermine their purpose.