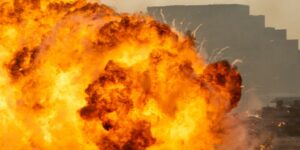 Russia’s invasion of Ukraine has made one thing very clear: The weapons designed for fighting away from cities aren’t suitable for fighting in them. Tanks and armored personnel carriers are relatively easy targets. You can even strike them from below by using the in-street access and timing the removal of manhole covers. Even defending the city isn’t ideal as you’d want to be able to use weapons that can fire indirectly and still be easily used by civilians so that their source isn’t obvious for counterattack and you can use the manpower you have. While defending a city appears to be vastly easier than taking one, concerns about friendly fire events suggest that weapons that are more focused on taking combatants out of the fight, even for a short time, instead of killing them would be preferable. This is to avoid the problem of catastrophic friendly fire and in order to avoid making the conflict more personal not to mention avoid war crimes. Granted, not attacking cities in the first place would be ideal, but we can’t now deny that bad actors won’t attack cities.

Let’s talk about how the war in Ukraine is likely to change thinking on both offensive and defensive weaponry.

In the movie Stripes, the military develops and deploys an Urban Assault Vehicle which turns out to be a GMC motorhome that has been converted into a hardened weapons platform. The advantage is that the vehicle looks unthreatening and can more easily navigate city streets and its weapons loadout is largely anti-personnel and relatively short-range in sharp contrast to an actual tank. While we’re talking about a movie, the reality that is clearly being painfully demonstrated by the Russians is that in cities, weapons designed for combat away from cities are sharply limited.

Tanks are particularly vulnerable (there have been efforts to develop urban tanks with mixed results) if they don’t have an infantry screen that can keep low-tech anti-tank weapons at bay. Attackers can, if they get close enough with explosives, disable a tank by blowing off its tracks and damaging the drivetrain. But infantry screening a tank in a city makes them easy targets, leaving the expensive tank exposed and vulnerable.

Russia’s massive superiority in weaponry seems to have done more damage to Russia so far by triggering massive sanctions and, most recently, war crimes investigations resulting from its actions. Russia needed to move swiftly to secure Ukrainian cities before the world could respond but that weapons advantage turned out to be a huge disadvantage when used against cities.

Civilian deaths and injuries, particularly children, and tremendous collateral damage will, win or lose, be a terrible expense for Russia to bear both financially and criminally. The world is watching this mess and as despicable as Russia’s actions are, it is clear its weapons are inadequate to the task and every country may have to attack or defend a city at some point, opening the door for innovation in urban warfare.

Top of the list? Either the offensive or defensive elements need eyes that extend over the contested areas. This can be most easily handled by drones, but commercial grade flying drones are easily dispatched and military drones are very expensive. However, drone swarms using inexpensive cameras and deployed at scale could accomplish this task relatively inexpensively as long as the solution includes a way to retrieve and recharge the drones as needed from an armored mobile depot.

Non-lethal weapons would also be critical both to avoid friendly fire incidents from defenders and collateral damage by attackers. Killing civilians is unacceptable to the world at large (as it should be), and Russia is facing the potential for a total state failure as a result of massive sanctions that have all but shut the country down economically. If women and children weren’t being killed, the world response would likely be more survivable. Right now, Russia appears to be looking at a lose/lose outcome. It may outright fail in Ukraine, but it will have become a global pariah and their actions have largely turned most of the planet against the country. If Russia wins, it could bear the expense of rebuilding Ukraine and still have to face war crimes trials, continued strict sanctions, and a far more aggressively armed border.

There has already been a blending of police and military technology, but even before this war, analysts have been working on changing the rules when it comes to urban warfare. The eight rules in the inked article point out problems with both defending and attacking a city.  The urban defender has a huge advantage but tends to lack any ability to counter-strike, as well as lack advanced weapons.  The attacker’s technology is largely rendered ineffective because of the tight spaces and inability to use air defenses to identify and respond to defenders. The attacker has limited cover, providing the defender with additional advantages. Every building is a bunker which helps repel any attack, but also makes it hard for defenders to repel the attackers. Only explosives work well, but this increases collateral damage to unacceptable levels for both the attackers and the defenders. The defenders have the advantage of movement but often lack the ability to better coordinate that movement. The underground of the city can become a refuge for either the attacker or the defender, significantly extending the length of the conflict and the potential for collateral damage. Neither side can concentrate its resources for a definitive victory which again extends both the conflict and the collateral damage.

Urban Warfare is ill-advised. Existing weapons for both defense and offense are inadequate for the task, though the advantages the defenders enjoy are in sharp contrast to the problems the Russian attack forces are experiencing. Some of those problems appear to be due to incompetence, which may be intentional by Russian operators siding with the Ukraine and secretly revolting (it is hard to imagine the Russian military being so incredibly incompetent given its history).

This is going to force militaries to rethink their weapons programs, hopefully, prioritize urban defense over urban assault, but likely develop unique weapons for either eventuality. I’d expect a much more aggressive use of drones, better body armor, and smaller robotic weapons systems that could better function in urban environments, far more development on non-lethal weapons to reduce collateral damage, and an aggressive use of autonomous weapons at scale in urban form factors to assault more successfully or defend, urban areas. Because one thing is clear: the weapons in use by both Russia and the Ukraine are suboptimal for the kind of war they’re fighting.

It may be time to revisit Science Fiction Prototyping in the development of urban offensive and defensive weapons while we consider that the old policy of pacifying Russian didn’t work. Let’s hope China is realizing that if they attack Taiwan, they’ll regret it as much as the Russian leadership is likely regretting attacking Ukraine. And, with Taiwan, thanks to this action by Russia, I expect the response will be far more swift and painful.

I stand with Ukraine.

Is the United States the Best Spot for Your “IVF Holiday?”