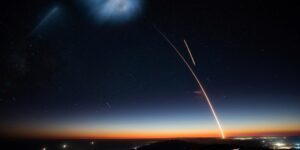 
SpaceX successfully launched an advanced GPS satellite for the U.S. Space Force on Thursday (June 17). This marks the 19th launch of the year here on the Space Coast. The GPS III SV05 satellite mission is the second to launch so far this month for SpaceX, following the launch of a broadband satellite for Sirius XM on June 6.

Three previous advanced GPS III missions also launched on Falcon 9 rockets, including two missions last year. Another of the satellites will be launched in August 2019 on the United Launch Alliance’s final flight of the Delta IV Medium rocket, which will launch on the Delta III Medium rocket in August.

It’s SpaceX’s 19th rocket launch (and landing) of the year.