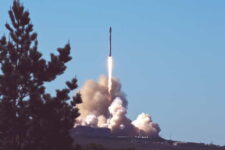 Russia and China have begun to draw up ambitious plans for missions that would directly compete with those of the United States and its partners.

They have teamed up for a robotic mission to an asteroid in 2024.

They are coordinating a series of lunar missions intended to build a permanent research base on the south pole of the moon by 2030.

The first of those missions, a Russian spacecraft with the revived Soviet-era name Luna, is scheduled to launch as soon as October, aiming to locate ice that could provide water to future human visits to the moon.

It will be the first of a new era of space competition that could be as intense as the first in the first two decades of the space race that followed the Soviet Union and the U.S.”

Russia, Once a Space Superpower, Turns to China for Missions

The two countries have pledged to cooperate on expeditions to the moon and to an asteroid, setting the stage for a new space race with the United States and its partners.

It is China’s first manned space mission since 2016 and the first time astronauts will go to the country’s new space station which is still in development.

Align Your Business Goals Into One Reality