A small section of the arm boom and thermal blanket of Canadarm2 was hit .

The Canadian Space Agency first noticed the incident ‘during a routine inspection’ on May 12 . The arm is ‘continuing to conduct its planned operations,’ CSA said in a blog post .

More than 27,000 pieces of space junk are tracked, but many are ‘too small to be tracked but large enough to threaten human spaceflight and robotic missions’ According to NASA, 23,000 are larger than a softball and are traveling at speeds up to 17,5000mph .

There has been an average of 12.5 ‘non-deliberate fragmentations’ occurring every year for the past two decades, according to the European Space Agency

A piece of space junk has damaged the International Space Station

A robotic arm attached to the outside of the International Space Station was hit with space junk and visibly damaged, the Canadian Space Agency said in a blog post.

A Giant Piece of Space Junk From a Chinese Rocket Is Hurtling Towards Earth ? Here?s How Worried You Should Be

A large piece of space debris, possibly weighing several tonnes, is currently on an uncontrolled reentry phase (that?s space speak for ?out of control?), and parts of it are expected to crash down to Earth over the next few weeks. If that isn?t worrying enough, it is impossible to predict exa 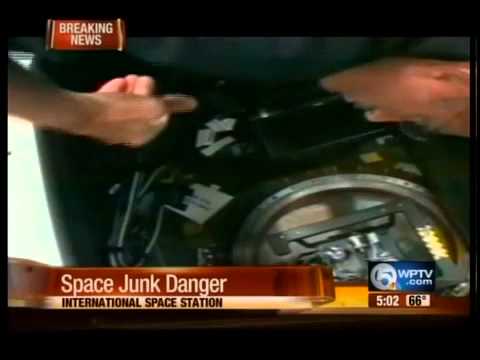