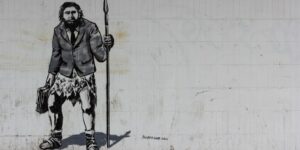 The skull was originally found in 1933 by Chinese laborers building a bridge in Harbin, a northern Chinese city, during the Japanese occupation. To prevent the skull from falling into Japanese hands, it was wrapped and hidden in an abandoned well. It was only rediscovered in 2018 when the old man who originally hid it told his grandson, shortly before his death.

The skull also has a cranial capacity of approximately 1,420 milliliters or 48 fluid ounces, but the skull also possesses many primitive features that make it a unique link between modern humans and Neanderthals.

The new species was named Homo longi – or “Dragon Man” – referring to the valley it was found in.

Given the location where the skull was found and its large size, the team believes that the ‘Homo longi’ may have adapted well to harsh environments scattering all over Asia.

Researchers said Homo longi or “Dragon Man” could replace Neanderthals as our own species’ closest relative.

A large skull belonging to an ancient human that was found in China has been classified as a new species called Homo longi ? but critics say the skull might actually have belonged to a Denisovan

Bones found in Israeli quarry belong to relatives of Neanderthals

After years of study, scientists reported bones found in an Israeli quarry are 120,000 to 140,000 years old, and probably belonged to a group closely related to Neanderthals.

The early humans may have also been ancestors of the Neanderthals, the study said, challenging thinking that our evolutionary cousins originated in Europe.