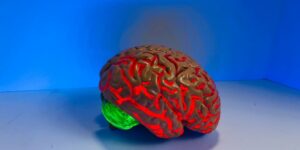 An experimental device decodes signals in the man’s brain that once controlled his vocal tract.

The man is currently limited to a vocabulary of just 50 words. He communicates at a rate of about 15 words per minute, which is much slower than natural speech.

“This tells us that it’s possible,” says a neurosurgeon at the University of California, San Francisco.

A device that allows people who can’t speak to communicate using brain circuits previously used for speech would be “more natural, and hopefully effortless,” an engineer says.

In a medical first, researchers harnessed the brain waves of a paralyzed man unable to speak ? and turned what he intended to say into sentences on a computer screen. It will take years of additional research but the study, reported Wednesday, marks an important step toward one day restoring more natural communication for people who can?t talk because of injury or illness.

Each fingertip has more than 3,000 touch receptors, which largely respond to pressure. Humans rely heavily on sensation in their fingertips when manipulating an object. The lack of this sensation presents a unique challenge for individuals with upper limb amputations.

A group from the New York University School of Medicine have designed a smart, closed-loop brain implant to detect and relieve bursts of pain in real time.

Video games will be offered by Netflix within the next year

Business investment in China: the experience of the Manifestgrowth venture fund