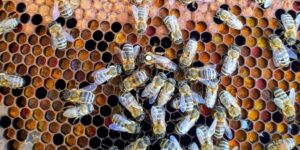 A new study has found the genetic foundations for the cloning adaptation of the South African Cape honeybee.

Researchers say that bypassing the DNA recycling process is unlike anything they have ever seen.

Unlike most animals and even their Queen, the female workers don’t reshuffle the DNA of eggs they lay, meaning the bees have managed to lay eggs without that process.

The Cape honey bee can sneak into the hive of the lowland honeybee rivals and produce copy after copy of themselves with no need for a queen.

The researchers say that while the process is incredible, it’s also extremely dysfunctional and it’s not quite clear why the bees are cloned themselves.

The bees have a genetic mutation enabling them to lay eggs parthenogenetically with all the genetic material from the eggs. They don’t throw out any of the chromosomes that are needed to make them produce offspring in their own nest to create perfect copies of themselves.

A subspecies of South African honey bee has been discovered to be comprised of millions of clones from a single individual.

The worker bees’ ability to clone themselves can be as destabilizing to the hives of other species as it is to their own.

A team of researchers from the University of Sydney, the ARC-Plant Protection Research Institute and York University, has found that workers in a species of honeybee found in South Africa, also known as “Cape honeybee,” reproduce by making near-perfe