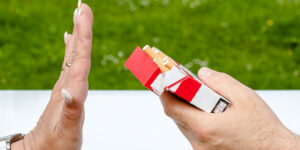 The numbers behind the tobacco epidemic are staggering – there are around 9 million adults who smoke in the UK. WHO reports that smoking kills more than 7 million people around the world each year. What’s more, smoking is the primary cause of preventable illness and premature death, accounting for approximately 79,000 deaths a year in England according to ASH. The evidence is damning.

Smoking tobacco damages the majority of the human body’s organs. It is associated with:

As stated in the US Surgeon General report, ‘there is no risk-free level of exposure to tobacco smoke, and there is no safe tobacco product.’

Not only is smoking dangerous for your health, but it contributes to global poverty, deforestation, littering and pollution. The high cost of smoking also hits your bank balance.

The World Health Organization (WHO) has promoted World No Tobacco Day as an annual awareness day since 1987 on 31st May. The purpose of this day is to drive governments across the world to change their policies to help to stop this tobacco epidemic. The day also acts as an incentive to encourage smokers to quit.

How to beat a smoking addiction

Due to nicotine addiction, stopping smoking is can be excruciating. Addiction is defined as not having control over doing something that may be harmful to you.

When people start smoking they are of course not thinking about the consequences. Sadly many don’t think about them until it is too late. Many smokers are actively trying to give up and perhaps have tried many times before.

Intentions to stop smoking often aren’t successful because the nicotine from cigarettes trains our brain to want or need to smoke so much that it overwhelms any attempt to stop.

Around two-thirds of British smokers would like to quit and about seven million try each year.

Take the support from the professionals

The NHS offers a large network of support. Your GP will refer you to the local Stop Smoking services in your area.

You can also sign up to 28 days of quitting smoking support and advice with Smokefree.

Harm reduction – the most effective way to give up

Harm reduction is seeing unprecedented success rates for giving up smoking as it is deemed much more realistic than the previous ‘cold’ turkey’ approach. The UK is seeing stopping smoking success rates at an all time high.

E-cigarettes are believed to be 95% less harmful than traditional tobacco and are encouraged by the NHS as a way of gently phasing out tobacco.

Approximately 2.9 million adults in Great Britain currently use e-cigarettes and of these, 1.5 million people have completely stopped smoking cigarettes.

Carry on despite any setbacks

Don’t be hard on yourself – a setback shouldn’t mean giving up completely. It doesn’t mean that you won’t get there in the end!

Feeling restless, angry, fed up, unable to concentrate and hungry are all normal feelings when giving up smoking. They will pass and you can control them by using a nicotine product such as an e-cigarette.

If you gain any weight from an increase in snacking, make sure you increase your exercise as this will help you physically and mentally. Remember that any weight gain or negative feelings will be temporary – there is light at the end of the tunnel!

Start thinking like a non-smoker – smoking is simply not an option.

Smoking any form of tobacco is deadly, so don’t be tempted to make this swap. As roll-ups are cheaper than manufactured cigarettes, they can be seen as actually more dangerous due to the lure of saving money – but it is still tobacco!

Many studies show that those who give up smoking on a specific day are much more likely to stay smoke free in the long-term.

The collective support of many others also doing the same thing is very powerful – you are not alone. Make World Tobacco Day 2018 your day to quit!

Costs and Legal Aspects of Surrogacy in the Ukraine