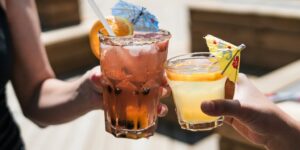 Vaping has become much more popular over the past few years and there’s been a huge boom of new brands and manufacturers within the vaping industry.

Whilst there’s been constant debate regarding whether vaping is safer than smoking cigarettes, there’s also a lot of controversy raised around just how safe vape e-juices actually are.

Even though you’re not smoking nicotine cigarettes with many pollutants, you’re still inhaling a substance that is made up of a number of different chemicals. Therefore, it’s important to really understand what vape juices consists of so you know what’s safe and what to avoid.

Brands focus on developing smooth and flavorsome e-liquids to satisfy their customers and keep them buying their products, as well as making a signature company name within the industry.

To create smooth flavors, e-juices are created through the use of either PG (Propylene Glycol) or VG (Vegetable Glycerin) or a combination of the two. Quite often, you’ll find that e-juices will have a specified PG/VG blend ratio which indicates the thickness of the juice. Once the base ingredients have been selected, the flavoring is then added to generate a distinctive and enjoyable taste.

As a non-toxic flavoring ingredient, PG is often used throughout the food industry as an ingredient in specific flavoring products and food colorings. As it’s an additive, it’s also occasionally used throughout the pharmaceutical industry. Propylene Glycol has a viscous texture which allows it create a smoother vaping experience and, considering there have been no evidenced health concerns regarding the chemical, it’s known to be safe for use.

This is another non-toxic ingredient that is a fairly dense liquid derived from vegetables and plant oils. It’s known to be very sweet and thick, which makes it a good addition to products across a range of industries, including that of that of the food and cosmetic markets. VG is very thick as a single base ingredient, so it’s difficult to vape on its own, but it doesn’t pose any actual further health issues.

Most of the time, your e-liquid will have a PG/VG ratio which gives you a general idea of how thick the juice itself is and how easy it is to vape. In the summer, liquids with higher VG ratios are recommended as the juice will be denser and less likely to evaporate as quickly.

Diketones are another type of additives that are used for additional flavoring and can be found in use throughout the food industry just as much as the vaping industry. Whilst food products need to be tested for diketones, inhalation products don’t require the same testing, so it’s difficult to know exactly how harmful diketones can be when inhaled.

Diketones are made up of a range of chemicals – but the most dangerous is that of diacetyl which you need to keep an eye out for when purchasing new e-liquids from any brand or manufacturer.

Diacetyl is a substance that can cause bronchiolitis when inhaled in large quantities over a long period of time. Even though vaping doesn’t expose you to immense levels of diacetyl, it’s still a good idea to steer clear of it to avoid the risks that it can have.

Whether you’re an experienced vaper or just starting out, you want to ensure that you’re having an enjoyable yet safe vaping experience, so it’s important to really understand the ingredients used within your vape juices.