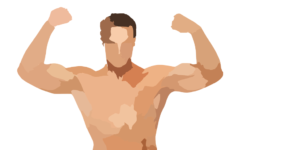 The first thing that pops into most people’s head when they hear testosterone is adolescent boys and macho men. Although the hormone is the key male sex hormone, it is responsible for more than just the sex drive in men.

Testosterone plays a major role in adolescent boy’s transition to adults. It is responsible for the development of the sexual organs, facial and pubic hair, strengthening of the muscles and bones, general growth and deepening of the voice. Typical male characteristics.

The job does not finish after puberty, testosterone regulates the production of red cells, bone density, muscle mass, fat distribution and other suxual related functions in adult men throughout their life.

What few people know is that testosterone is also essential for women’s health. Women do not produce the hormone in the same high levels as men but nevertheless it is needed to regulate diverse bodily functions, libido, mood and energy levels.

Testosterone is a growth hormone, to get a better idea on how growth hormones affect your body you can take a look at this infographic I found on https://www.hgha.com/

Where it comes from

As mentioned before, testosterone is a sex/growth hormone. It is also referred to as a muscle building steroid, you most probably have heard of it in athlete doping reports. For the geeky readers, the chemical formula is ‎C19H28O2.

The process of producing and regulating testosterone levels in the body is quite complicated.

In a nutshell, in men it is as follows. The hypothalamus, a gland in the brain, tells the pituitary gland, also in the brain, to tell the leydig cells, that are in the testes, to convert cholesterol into testosterone and release it into the bloodstream. That in return tells the hypothalamus that the body has enough testosterone and to stop ordering glands to produce it. This is a very simplified version of what really happens, what really happens is far more complicated.

Health issues and side effects

Although hormones are essential to nearly all of our bodily functions, an increase or decrease in levels can have serious negative effects on our health.

It is natural for the testosterone level in men to start declining when they get older. Usually this starts in the 40s, but it can start as early as their mid-thirties. Some refer to this as the male menopause and the “side effects” are what we typically associate with getting older: lower energy, a diminished sex drive and a gradual weakening of muscles and bone structure.

Low levels of testosterone during adolescence can gravely affect the development of young men, impeding their growth and the development of their genitals and secondary sexual characteristics. In middle-aged men “Low T” is also associated with depressive moods, sleep disturbances or fertility problems.

Although women generally have a much lower testosterone level and it is not their primary growth hormone, declining testosterone levels can have the same effect on women as men. Namely fatigue, muscle weakness, sleep disturbances, weight gain, fertility issues and loss of libido.

According to an article on CNN an increasing number of younger men are suffering from Low T and its consequences. A lot of our modern habits can have a negative effect on our hormonal balance, so it is worth first checking your hormone levels if you do not feel on top of things. BUT do not take things into your own hand and start taking supplements without any consultation. The side effects of too much testosterone are equally bad if not worse.

5 Reasons All Startups Should Use Cloud-Based Applications