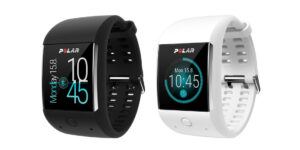 The Polar M600 is the first enthusiast device that uses Google’s operating system to turn the watch into much more than just a fitness tracker. Is the M600 ready for prime time?

I’ve had my eyes on the M600 for some time with the intention to replace my everyday fitness tracker. There wasn’t a particular fitness feature I was looking for—the whole of my curiosity was based on the fact that Polar had chosen to design this watch around Android Wear.

The M600 isn’t the first Android Wear fitness smartwatch and follows the Moto 360 Sport and the Sony SmartWatch 3. However, it is a showcase example of an industry that is evolving quickly. There’s no denying that Polar has made a big step forward and created a product that isn’t just raising questions for products within Polar’s own portfolio, but is setting trends that others will have to follow.

Polar has positioned the M600 at the high-end of its mid-range “sport” offering, providing a bridge between watches for aspiring and competitive athletes. At $330, it isn’t cheap, but it includes the full complement of hardware features we expect from a serious fitness smartwatch today, as well as access to a good chunk of Polar’s most popular fitness tracking features—save for a few high-end training functions that are reserved for the V800 watch that caters to competitive athletes. Polar itself describes the device as a “smartwatch designed to suit an active lifestyle without compromises.”

Polar’s Chief Strategy Officer, Marco Suvilaakso, told us that the company sees the potential for the M600 to combine Polar’s training software with the every day functionality that Android Wear can deliver today. This includes “voice control, the ability to customize watch faces, receive calendar notifications, read and reply to texts when using an Android phone, scroll through social media feeds, and access more than 4,000 third party apps via Google Play.”

The operating system for the M600 is Andriod Wear 2.0 and requires smartphones running Android 4.3 or higher, or iPhone 5 or later running iOS 8.2 or higher for access to full feature set.

Getting the M600 up and running isn’t rocket science, especially if you use an Android phone,. All you need is the Android Wear up and you can pair it with the watch.

Instead of overloading the watch with several physical buttons, the M600 has only two buttons: one to restart the watch, and the other as a shortcut to launching a workout via the Polar Flow app.Every other feature is accessed either via the touchscreen or voice control.

If there is one application that defines the core of the M600, it is Polar’s Flow web service, which is an integral part of all Polar tracking devices. Most of the Flow features are available on all Polar devices as well, yet they feel much more naturally integrated in the M600 interface due to the configurability of the watch’s tracking abilities.

The M600 doesn’t offer any surprises in terms of computing hardware. There is enough horsepower to run the software it has today, and there’s additional performance room for applications with demanding features such as video playback.

Noteworthy is also a 500 mAh battery, which has about one fourth the capacity of a smartphone battery and easily achieved a running time of two days during our test with about three hours of training activities per day. Continued use of GPS will drop the battery time to just above eight hours. A full recharge of the M600 battery from 0 to 100% takes about 100 minutes.

Smartwatches and especially fitness smartwatches aren’t exactly stylish. The M600 is no exception and it certainly isn’t a looker. There are some great choices Polar has made—such as the Gorilla glass that can take a great deal of abuse and doesn’t show any scratches after I’ve hit walls and a few steel railings. Unfortunately, the silicone band shows substantial wear after just six weeks of use. Expect discoloration and scrapes to impact the look of the band, which doesn’t make it a product you’d want to show on your wrist when going out.

The M600’s greatest weakness is the way how it connects to other applications and leverages available data that it does not record by itself. While Android and Android Wear are designed to build an ecosystem of data and applications that caters very much to fitness enthusiasts as a rather social bunch of people, Polar’s application and integration approach is too isolated and should be more open, which is the case for products within the Polar product range, as well as third-party products.

The M600 is designed to deliver on its promise to be a fitness smartwatch out of the box that just works. It delivers that promise in virtually any scenario that lets users simply focus on activities and not worry about whether they are tracked correctly and in their entirety. The automation goal also includes the function of syncing data between the watch, the smartphone, and the web service. Syncing happens frequently—for example when the Flow app is launched on a phone. Occasionally, however, data only partially synced and the full data set wasn’t readily available to me. A forced data-syncing feature would be welcome addition to the M600 to complete data sets when they’re needed on all platforms.

From the simple view of the common Android Wear smartwatch, there are better general smartwatch choices out there today, but none that also deliver comprehensive activity tracking and analysis at a similar level.

In the end, the compromises Polar has made with the M600 are thoroughly convincing. At the very least, this device is the most obvious sign so far that health and fitness applications on watches will become even more important as more data sources become available and vendors understand how to use and present this information.

Android users, especially, have a good reason to take a closer look at the M600. There is no Android Wear watch available today that surpasses the M600 in combining everyday usability with fitness tracking and analysis.

Read the full article on Breakingmuscle.com