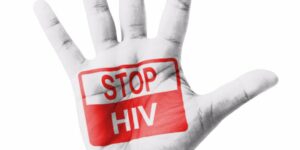 Current HIV medications can prevent the disease’s progression, but the virus can stay in a body for a lifetime. HIV spreads just like any other viruses, because it make copies of itself when it takes over a cell’s DNA, most medications can only block new cell from HIV, but they can’t “Kill” the virus.

We believe that HIV was originated in Kinshasa,in Democratic republic of Congo in 1920, when chimpanzees infected human, but before 1980 we didn’t know how many people were infected with HIV, today more than 37 million people living with HIV, their stories are different and painful, and they can’t image their lives without medicine, lot of them lost their families, and friends, and they live on it that doctors, and scientists will find a medicine which will “kill” HIV. In 2012 a research group from University of North Carolina published a proof that they have a medicine which will cure HIV positive people, that was the”shock and kill.”

They showed that Vorinostat can “shock” some infected cells. So the virus is not hiding any more, so it can be “killed”. The largest problem that doctors and researches have is how to “shock” the infected cells fast, because cells are copying themselves to fast, and almost it is impossible to shock and kill them.

With this system only two babies, and one man from Germany were cured, compared to 37 million people all around the world shows as that
treatment successes are few.

Djurica Stankov an ex porno actor who suffering from HIV for 12 years, does not believe much in this “Killed and shock” treatment. He hopes that scientist will find a medicine which will help all people who are having HIV. He says that he has problems with kidneys, heart and brain, and that the quality of his life is average. Also what is very important is that the medicine quality is not equal in every country, and while patients with HIV are waiting for a “miracle” it will be good to consider equal treatment for everyone. Also many people wonder how is it possible that scientist didn’t find the right medicine to fight HIV when there are few famous people who had HIV and live a normal life.

The ill people only have one wish, and when we are talking about people with HIV in the twenty first century there is a “deadline” for this problem to be solved.

Are Small Businesses Still at Risk from Cybercrime?