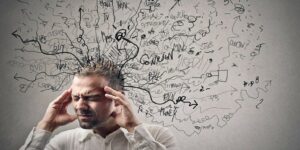 Getting stuck in a rut of negative thinking isn’t just bad for a person’s mental health, it hurts them physically too. In fact, research has proven that consistently having a dismal outlook on life can increase the risk of disease because of the way that it lowers the immune system. It also zaps energy levels, spikes blood pressure, and increases the amount of damaging cortisol that floods through the body. Luckily, negative thoughts can be changed though by using some of the following easy techniques:

Meditation is an ancient technique that helps put a stop to rumination. It works by retraining the mind to let go of any thoughts that are not consistent with what a person wants to focus on. In order to practice it, all a person has to do is relax in a comfortable position for a few minutes while letting their mind wander. Then, they can start to gently shift their thoughts towards something positive that they would like to think about, such as getting a promotion at their job. Any time that negative thoughts start to float into their mind, they should be pushed away. At first, it takes a considerable amount of concentration to meditate. But if it is practiced daily, it becomes so easy to do that a person can use it virtually anywhere.

Sometimes, in order to stop negative thinking, it helps to begin cognitive behavioral therapy with a psychologist. This type of therapy is unique because it focuses more on moving forward regarding issues that a person is dealing with instead of looking back at the past. Many people find it especially helpful whenever they want to improve their life, but they can’t seem to let go of old ideas that are hurting them. For example, if a person can’t stop thinking that they are a failure, the psychologist leading the therapy might help them address and correct the false belief, so they can start to have an improved sense of self-esteem again.

Believe it or not, whenever a person is suffering from negative thoughts, depression, and anxiety, one of the best things that they can do is to schedule a doctor’s appointment. The reason for this is that there are numerous physical ailments that can contribute to these symptoms, such as thyroid hormone imbalances, Parkinson’s disease, and fibromyalgia. And if the physical ailments aren’t treated, a person’s mental health state will most likely continue to stay as it is.

The last method of improving negative thinking might sound simple, but it isn’t one that should be taken lightly. It involves a person beginning to work with a life coach to make changes to the aspects of their life that seem to be causing them to feel so discouraged and down all the time. For instance, if a woman happens to be in a relationship with a man who treats her badly, and this is affecting her self-worth, it might be time for her to let go of the relationship. Another example would be a man who has negative thoughts day and night because he hates his job so much beginning to hand out copies of his updated resume in order to make a career move that better suits him. It is important to mention though that it is often best to work with a therapist to ensure that the emotional damage that was done by the negativity is addressed. Otherwise, a person could end up in another situation that causes them to continue the cycle.

As you can see, putting an end to negative thinking is important to a person’s mental and physical health. But the only way to put a stop to it is to take some type of positive action in addressing why it is occurring in the first place. It also helps to retrain the mind to stay focused on positive thoughts through meditation or working with a life coach. And remember, always talk to a licensed doctor or psychologist before beginning any type of new treatment or major life changes.

Can You Use Cannabis to Prevent Illness? What You Need to Know!

The 5 Most Remarkable Healthcare Innovations, Events, and Discoveries of 2018