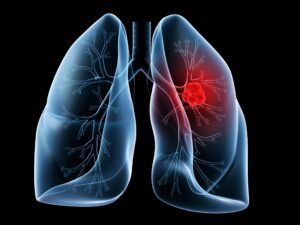 In the Fall of 2012, Jim McHutchison of York, Maine started to feel ill while developing a cough and shortness of breath. However, neither the 72-year-old nor his doctors suspected it to be cancer, because Jim works as an advertising man in an office and he never worked in a shipyard or heavy construction site with high risk of asbestos exposure.

Jim was released from the hospital after pathologists removed fluid around his left lung and confirmed that there weren’t any signs of mesothelioma.

But, another pathology report taken 2 weeks later gave a different scenario. In March of 2013, Jim was diagnosed with pleural mesothelioma. Doctors told him he had less than a year to live.

“I said ‘What can we do?’ and my family doctor said ‘Nothing. We’ll do the best we can to keep you comfortable’,” says McHutchison.

“I told him I never wanted to see him again.”

Jim and his wife refused to accept the grim prognosis and vowed to find doctors who could offer them some hope.

The McHutchisons started their journey of hope by meeting a number of doctors along the East Coast, including mesothelioma specialists at several renowned cancer centers such as Memorial Sloan Kettering, Brigham and Women’s Hospital, Massachusetts General, Dana Farber Cancer Institute, and the NIH in Bethesda, Maryland.

They were told by all the doctors that Jim’s only options were either EPP surgery, which he was afraid that it would leave him a “surgical cripple,” or regular chemotherapy, which is effective only minimally and has numerous side effects.

Altogether, the couple had met 40 physicians and Jim refused all of the standard options offered by them and looked for an alternative approach.

Because of the rarity of the disease, only about 2,500 cases of mesothelioma are diagnosed in the United States each year. Poorly funded mesothelioma research yields few options and few medical centers are experienced enough to handle the disease. They realized in order to find help, they would have to look beyond traditional medicine.

As Jim started asking people about an alternative method to mesothelioma treatment and one of his friends told him about Budwig’s Protocol, a cancer fighting regimen developed by a German doctor in the 1950s.

Jim decided to take on the diet. For more than 3 years now, Jim has been munching on the diet, which is a combination of fruit, cottage cheese and flaxseed oil.

“It is something that Pepper and I do together,” he says.

“She makes it and I eat it. It keeps our focus on defeating this cancer.”

Jim never stopped experimenting with other natural compounds. He even tried Vitamin C infusions. The couple isn’t sure if all these experiments have made any difference, but they say their attitude has.

Jim says he is blessed with a curious mind and he has never stopped his search for answers. He believes if he seeks knowledge, he’ll gain wisdom.

Immunotherapy and positivity as a tool to combat mesothelioma.

The couple’s persistent perusing about mesothelioma and their search for treatment also led them to the encouraging new immunotherapy drug Keytruda (pembrolizumab). Jim has been taking the drug since August, 2015 and has found good results.

“I don’t know if I’m in remission but everything has diminished on Keytruda,” says Jim.

“My family physician says I am a medical miracle and I feel great.”

Jim likes to think positive and always surrounds himself with positive thoughts in his head. He dubbed his car, a 1999 Mercedes, “Bucket list” car. Its license plate reads “GO477” – his goal to make it to his 77th birthday on May 18, 2018.

Jim’s message of hope: “The most important thing is to not give up.”

HummingBad and Worse: Android Malware to Watch Out For

How to Select a Virtual Office Provider in London