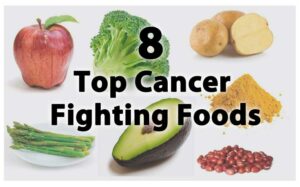 Fighting cancer can be very agonizing and tedious experience. The pains from radiography can make some patients feel like going home and dying. The countless tablets make the treatment process very depressing also. But there can be a better, more natural solution.

Some of the factors that trigger pain when fighting cancer include exposure to chemicals, genetics, poor diet, and deficiency of other vital substances. To make matters worse, people now eat mostly processed foods with poor ingredients and harmful preservatives. But like they say, “you are what you eat.”

Studies have shown that natural foods can help prevent the growth of cancerous cells in the body, as well as fight the ones already present.

Oily fish work against cancer in the same way that ginger does. It reduces COX-2 and consequently discourages inflammation. But it does more than that. Oily fish is rich in omega 3 which re-lengthens telomeres, which are shortened by cancer, thereby restructuring the DNA to its initial structure and assuring longer and healthier living. Some of fish types in this category are herring, mackerel, salmon, and tuna fish. They are rich in vitamin A, which particularly fights prostate cancer.

These natural foods produce anticancer carotenoids which are converted to vitamin A, which, as we know, helps to cancer. Raw carrots particularly provide the body with pectins which aid the gut bacteria. They do not directly fight cancer this way, but a congested and toxic gut is known to be prone to cancer. So find ways to include these foods into your diet daily. You can make some of them into juice to drink.

Olive oil has many amazing benefits, which helped ancient Greeks and Romans lived long during their time. But particularly, studies have linked the habitual use of olive oil in cooking in Mediterranean countries to their relatively low level of cancer patients.

If you are already treating cancer, a good intake of green vegetables, avocado, beans and pumpkins will protect the DNA from radiography. The antioxidants and anti-inflammatory substances produced by kale, spinach, collard greens and so on have been proven to help inhibit cancer. It gets better, green vegetables produce sulforaphanes which help in cancer correction.

Beans help fight breast and colon cancers. Studies have been shown where beans helped in fighting breast cancer in rats. A bean like soybeans which are high in estrogen- a substance which has been linked to cancer — has been shown to not only have no direct connection to the disease, but can, through its fiber, help in fighting cancer.

These two, like ginger, fight off cancerous cells. But it gets better. Garlic and onions have been known to directly inhibit the production of nitrosamines – a cancerogine that fights many part of the body like the colon, the breast and the liver. The allicines that are contained in garlics stop the supply of blood to tumours, thereby discouraging their growth.

Grapes are known to contain super antioxidant ActiVin which help in the fight against cancer. Berries too have their own phytonutrients which are very strong chemicals that can inhibit the cancer growths. These will combine in warding off cancer from your system. So take time and pack these natural foods into your system.

How Can Daily Adventures be Added to Holiday Journeys With Friends and Family?

5 Innovations That Make Your Life Easier