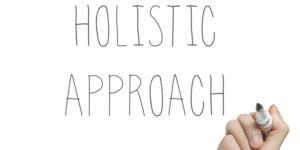 Holistic treatments have become increasingly popular in the past few years, particularly within an addiction treatment context. The alternative approach to addiction treatment is considered effective as it treats a person’s overall well-being in terms of mind, body, and spirit. There are now more holistic recovery centers for people struggling with addiction illness than ever before.

When someone has become addicted to substances, the damage done to the physical, emotional and psychological health can be significant. Holistic therapies are known to promote deep self-exploration that allows individuals to understand their addiction and be better prepared to overcome it. Holistic therapy differs from conventional medicine as it identifies root causes for conditions rather than just treating symptoms.

What Is a Holistic Treatment Program?

According to the National Center for Complementary and Integrative Health, almost 35% of American adults use some form of holistic medicine and it is a trend that continues to gain traction. The application of holistic medicine within a rehab context is a relatively recent trend although some of the therapies involved have been practiced for thousands of years.

The holistic approach to addiction treatment typically integrates physical, mental and spiritual models, combining therapies and practices for the most appropriate care of the individual. Holistic therapies are also referred to as alternative or complementary and are generally based on practices that have their origins in ancient cultures.

Holistic therapy is 100% natural which is important for people who have become dependent or addicted to highly potent substances. Not everyone feels comfortable being treated for drug or alcohol abuse with chemical medications as they fear to replace one dependency with another. Holistic recovery centers provide a completely organic route to sobriety that also promotes a healthy lifestyle.

Examples of holistic therapies used in rehab include:

These are just a few of the wide range of holistic treatments currently used in rehab facilities around America. The common denominator among them is that they treat the whole person rather than just one element of their symptoms or behaviors. Ultimately, the goal of addiction treatment is to address the underlying reasons behind a person’s negative compulsions and behaviors.

The Effectiveness of Holistic Therapy in Rehab

According to a survey of rehab centers carried out by Pastoral Psychology, around a third provide some kind of holistic treatment. In specific terms, the survey revealed that meditation is available as part of treatment in almost 60% of centers in the US. This gives an indication of the level of confidence the addiction community has in the holistic approach to rehab and recovery.

There are several reasons holistic therapies are so effective and have been shown to promote long-term recovery, the main one being that they arm patients with coping tools to prevent relapse. When someone has become addicted to substances, they may have initially started using to deal with, for example, a stressful job or the breakup of a relationship. Holistic practices and techniques teach rehab patients how to respond in more healthy ways to triggers for substance abuse which is extremely effective in helping them maintain sobriety.

In real terms, holistic addiction treatment is capable of dealing with the factors contributing to a person’s addiction including:

· The physical symptoms of substance abuse and withdrawal

· Poor nutrition as a result of unhealthy eating habits

Holistic and Conventional Care in Combination

Most experts in the field of addiction recognize that holistic therapies and treatments are particularly effective in rehab when used in combination with medical approaches. For example, people who have been abusing extremely potent drugs such as heroin may need extra help during detox to deal with the sometimes distressing withdrawal symptoms.

The majority of rehab centers offering holistic treatments provide medically-supervised detox to enable patients to rid their bodies of the toxins accumulated through substance abuse. Some holistic treatments such as massage therapy can be extremely helpful in reducing the discomfort associated with withdrawal from certain substances such as alcohol and heroin.

Ultimately, it must be the decision of the individual which course of treatment they pursue and they program they choose should be as specific for their needs as possible. The way to ensure the best chances of successful recovery is to complete a treatment program that meets the person’s needs completely.

How To Set Up A Virtual Office In 5 Easy Steps