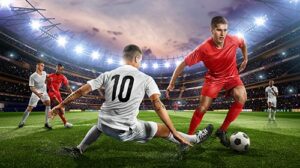 The issue of whether heading a football repeatedly can cause damage to the brain is one that has been receiving a lot of attention and discussion recently in the media.

Former Aston Villa and Southampton footballer Chris Nichol is one of many that have spoken out on the subject, stating that he believes his own memory problems have been caused by his career in football.

According to Nicholl, now aged 70, he has been left brain damaged from heading footballs. The ex-centre half recalls that he would stay behind after training with his team-mates to practice heading – “the balls were a lot heavier then”, he says.

His family have been campaigning for a number of years to get the English Football Association and FIFA to conduct research into the impact of heading a football, but the governing bodies have only recently started to take action.

His daughter Dawn, has spoken out about her father suffering from early onset dementia. She believes there is no doubt that her father’s condition was linked to his career in football. An inquest into Jeff Astle’s death in 2002 found that the repeated heading of heavy leather footballs contributed to his brain trauma. The coroner gave the cause of death as “industrial disease”.

Speaking recently on BBC Radio 5 Live, Ms Astle said: “At the coroner’s inquest, football tried to sweep his death under the carpet. They didn’t want to know, they didn’t want to think that football could be a killer and sadly, it is. It can be.”

You felt sick sometimes when the ball hit you. “They started out at 14 to 16 ounces but, with rain, they were two or three pounds. Even if it hit you on the side of the head, a graze, it was uncomfortable. Those early balls were really rather nasty.

“You are protected by your skull but what happens is [the brain] wobbles from side to side. And if the ball hit you from the sky when you were still on the ground, the feeling would go right through to your feet.”

Cognitive neuroscientist Dr Magdalena Letswaart, who led the study said: “In light of growing concern about the effects of contact sport on brain health, we wanted to see if our brain reacts instantly to heading a football. Using a drill most amateur and professional teams would be familiar with, we found there was in fact increased inhibition in the brain immediately after heading and that performance on memory tests was reduced significantly.

“Although the changes were temporary, we believe they are significant to brain health, particularly if they happen over and over again as they do in football heading. With large numbers of people around the world participating in this sport, it is important that they are aware of what is happening inside the brain and the lasting effect this may have.”

The University College London and Cardiff University have also conducted research which looked at the brains of five former professional footballers and one amateur footballer. All six of the men had played football for an average of 26 years and had experienced the onset of dementia in their 60s.

In four of the people studied, scientists found signs of Chronic Traumatic Encephalopathy (CTE) which has links with many symptoms of brain injury including memory loss, depression and dementia.

Prof Huw Morris, of University College London, said: “When we examined their brains at autopsy we saw the sorts of changes that are seen in ex-boxers, the changes that are often associated with repeated brain injury which are known as CTE.

“So really for the first time in a series of players we have shown that there is evidence that head injury has occurred earlier in their life which presumably has some impact on them developing dementia.”

Specialist brain injury solicitors at CFG Law believe the Football Association should look further into the link and expand on the current research results.

According to the Manchester law firm, “Although the current studies have only been carried out on a small number of cases, it is important that these findings are looked at in more detail and further research is undertaken to ascertain whether there is a link between heading a football and brain injury.

“Brain injuries can have far-reaching consequences, not only with the onset of dementia in later life but also other symptoms that people may not notice are causing them problems. We urge anyone who thinks they may have sustained a brain injury to seek medical assistance straight away.”

Dr David Reynolds of Alzheimer’s Research UK, makes the point that the benefits of regular exercise in terms of dementia prevention may well outweigh any risk of brain damage, especially for those who play football on a recreational basis.

Dr Reynolds suggests that a large study involving footballers without dementia is now needed to see who develops the condition.

The English Football Association has said it will now look more closely into the dangers of repeatedly heading a football and the links with brain injuries.

How to Effectively Grow Leads and Increase Customer Interaction