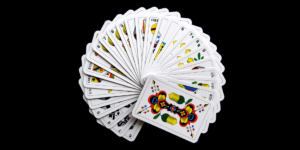 Card games have been around for some 1200 years. There are no records of the first person who tried filing for a patent, but the first reference to a game using cards comes from the land that invented macaroni, China.

Just like macaroni and gunpowder, card games conquered the planet. Spreading from China to India, then over Persia to Europe, and eventually some 500 years after Princess Tongchang was recorded as history’s first card player, the Italians were also introduced to card games, maybe together with noodles.

Today there is hardly a corner of the world where you can’t find people passing their time with a game of cards. Since official departments of statistics have not shown much interest in taking representative, worldwide surveys on the most popular card games, I will turn to the next best scientific method, a wild guess.

I have been to a lot of places and met people from all over the world, and there was hardly anyone that didn’t know how to play some version of Rummy. Sceptics of my scientific methods might say that, being able to play a game does not necessarily result in that game being popular. But there is also India, a country with 1.3 billion passionate Rummy players.

The Indians love Rummy, and even if only one out of every four Indians would play Rummy, that would be more than the entire population of the United States. Since a court ruled, a few years ago, that playing Rummy does not count as gambling, Rummy sites are popping up all over the internet, and even more people are playing Rummy online than maybe traditionally.

So Rummy definitely ranks high on my list of most popular card games world wide.

A lot of you might have never heard of this game, but over 1.3 billion people know this game very well as Dou Dizhu.

Around a quarter of the world population (scientific wild guess) are Chinese or have Chinese influence in their culture, and locals claim that Dou Dizhu is without doubt, the most popular card game in the region.

For those less familiar with Chinese card games ( at least 4 billion people), Fight the Landlord is a simple and fast paced game, where two “peasants” team up and play against the “landlord”, who starts the game with more cards than the other two players.

Statistically every fifth person you meet, any where in the world, must like this game, that is why Dou Dizhu deserves a place on the world’s most popular card game list.

Solitaire is one of my favorites for being maybe the most popular card game in the world. First of all, nearly anyone who has owned a deck of cards has played Solitaire, at some time or the other. If you have never owned a deck of cards, you have most probably owned, or worked, on a Windows computer. And who hasn’t played Solitaire on their computer while pretending to work?

These three are, in my opinion, the world’s most popular card games, and if you don’t believe me, go out and count for yourself.