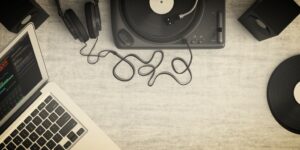 In 2002, ‘The Streets’ (A.K.A – Mike Skinner) released his debut LP ‘Original Pirate Material’. The majority of the album was produced, written, recorded, mixed and mastered in a small bedroom he was renting in Brixton, London.

The recording methods focused on utilising household furniture, such as mattresses, to reduce the echo when recording vocals. Skinner’s album, ‘Original Pirate Material’ generated a huge level of success commercially, reaching the top 10 of the UK album chart.

With Mike Skinner’s successful, largely home-produced album, a new wave of UK music appeared, out of which new genres such as ‘Grime’ were formed.

These genres quickly became popular in UK popular music culture, and took advantage of low cost methods, like those used by Mike Skinner.

DAW’s more commonly used by music industry professionals – for example: Pro Tools and Cubase, were complex to understand and expensive to access.

In comparison, FL studio helped to make music production and recording easier for the amateur, entry-level music artist/producer. In addition, easily accessible, free versions of FL studio made the software even more appealing to new musicians looking to profit from the music industry.

The opportunity that FL studio offered, opened up a path for more independent musicians looking to be successful with inventive, low-cost music.

One such artist to take advantage of the FL Studio software was Grime MC ‘Skepta’, whose largely self-produced album ‘Konnichiwa’ reached number two on the UK album chart in 2016.

Even so, despite a steady revolution in the way music is created, mixed and mastered, the old ways refuse to die out. In fact, producing music at more expensive, professional studios is coming back with a vengeance. This can be attributed to a music market that is more competitive than ever before, where a new song has to compete with over 30 million other songs for commercial success.

As a result of this competition, both professional and amateur artists are looking for methods whereby they can find an edge over their fellow competition.

For example, the majority of the artists generating the greatest commercial success still owe their thanks to more expensive recording studios, such as ‘Metropolis Studios’, in London. Metropolis still regularly makes use of older analogue equipment, rather than the newer digital versions.

The studio has high prices for their services, with VIP song packages starting at £25,000. However, this high cost can bring high rewards.

As an example, its mixing services have been utilised by British music legends including: Adele, Amy Winehouse and Queen.

To this day, the studio remains one of the first ports of call for Britain’s most popular musicians.

Metropolis surely shows the older methods of recording are not going away anytime soon.

However, there is no doubt newer music artists and DAW’s will have something to say about that.

What methods will artists and producers turn to in the future to create the best possible music? Only time will tell.

Which Type of Company is Best for Your Business?

WinX MediaTrans: How to Backup Files in iPhone/iPad without iTunes