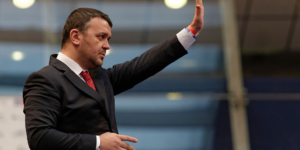 The use of video technology in sport, especially football, has been a major cause of discussion recently and will surely remain so over the coming months running up to the World Cup in Russia. After years of tests and appeals to allow video technology to be realized in football as an assistance to referees, there is finally light at the end of the tunnel; VAR might have its official debut in professional football this year in Russia.

Video Assistant Referee (VAR) is not an automated assistance system as some might believe but actually a team of three, consisting of a referee (video assistant referee), an assistant and a video operator. VAR will be used to review some game changing decisions the referee on the field makes, namely regarding goals, penalties, red cards and mistaken identity, with the help of recorded footage.

For most people it is a clear situation that supporting video footage can only result in fair decisions on the field and there is no question if it is the right thing to do. But there also those that believe the technology will interfere with the spirit of the game and doubtful referee rulings have always been a part of the game.

Tradition is not the only issue keeping football officials from allowing the implementation of VAR, many believe the constant breaks to evaluate footage would be too disruptive, extending the games, making them too long and maybe even too boring.

Despite a few test runs of the system in FA and EFL Cup games, officials and fans alike still have their doubts. Professional Rugby on the other hand was much braver to embrace the new technology and maybe football should learn from their experiences.

One of the world’s first full-time rugby referee, Ed Morrison, said the following when asked about VAR and football

“All of us are slow to accept change in all walks of life.

“In rugby, some people accepted professionalism and what it meant, whereas I struggled with it.

“I realise now that I was probably quite foolish. Now we have a professional game that everybody buys into and that’s great. And that’s exactly what will happen with the video replay system.”

The integration of video technology into rugby was gradual, with its ups and downs but now fans, officials and referees don’t want to live without it.

“People make judgments, and sometimes you disagree with those judgments.

“But it’s imperative that soccer, rugby and other professional sports use the technology that’s available. It would be crazy not to.

Nobody can see in the future but if the FIFA officials do there work right and learn from other sports, like rugby, I am sure VAR will be a success and become an integral part of football. On the other hand you can only postpone the decision, at the end of the day there is no hiding from technology, not even in football.

Drug Recovery and Substance Abuse Among Women:The Road to Recovery