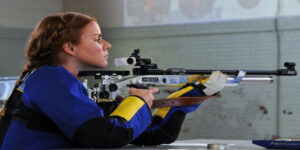 Knowing how to operate a gun is just the first step; actually hitting a target is next. And while firing a gun looks simple, keep it on target before, during, and after the act of shooting is an art. That art is called accuracy, and in shooting, accuracy is everything.

Whether for competitions, for hunting, or just for plain old self-defense, every gun enthusiast needs accuracy. Being inaccurate not only makes the shooter look bad, but it may also lead to unnecessary collateral damage. Accuracy can be improved simply by adhering to the four fundamentals of firing.

Have a Stable Stance

Having a good stance is always the first lesson (after gun safety) that firearms instructors give to new shooters. Discharging a gun creates recoil, a kickback that can unbalance an untrained shooter. Accurate shooting is all about managing recoil and minimizing unnecessary movement of the gun. Thus, a stable shooting stance equals a steadier aim and better accuracy.

Good shooting stances usually involve keeping the body’s weight forward and on the balls of the feet, as if the shooter were ready to advance at any time. The core (i.e., the abs and butt muscles) must be engaged to support the body’s balance. Every gun enthusiast who is serious about guns and wants to improve their shooting skills needs to be fit. Guns are weapons, after all, and weapons are merely extensions of the warrior’s body.

Recoil isn’t just limited to how powerful a gun is. The type of round fired will also contribute to the kickback. Thus, it is a good idea to know the ammo used and choose them according to what the shooting situation will be (i.e., short range competition or long range hunting).

Furthermore, guns are chambered to have a certain set of compatible rounds. For example, a rifle may be chambered either for 7.62×40mm Wilson Tactical rounds or for 7.62×35mm .300 Blackout ammo, but never for both. Using a caliber that does not match the gun may damage it and permanently reduce its accuracy.

Get a Good Grip

Aside from having a good shooting stance, shooters also need a proper grip on their gun. Where stances are meant to keep the shooter balanced, grips affect guns directly, specifically on maintaining the muzzle’s direction of aim. Because each time a gun is fired, it “hops” or veers upwards, which may affect the trajectory of the bullet leaving the muzzle.

With handguns and guns with pistol grips, holding them properly consists of the dominant hand (the one with the finger used to squeeze the trigger) holding the gun firmly with your palm and your three remaining fingers enclosing around the handle. The other hand wraps around the front of the dominant hand, supporting the latter’s three fingers with its own four. Both hands must be high along the handle. The thumbs must never be tucked behind the barrel, especially with semiautomatic pistols, as the slide may hit the thumbs, causing serious injury.

A person’s body will never be still unless they’re already dead. As a person breathes, their body trembles with the hum of life, and even more so when they run out of breath and their heart pumps faster to compensate for the lack of oxygen. This trembling will translate to shaky hands and may disturb the steady aim of a shooter. Veterans know how to manage and time their shots with their breathing.

Before a shot, shooters draw a deep breath and slowly exhale. Some hold their breath halfway through the exhalation then take the shot, but more-skilled gunners do it all in one fluid motion: inhale, exhale, fire. Repeat.

After a gun is fired, the recoil usually makes beginners drop their stance, grip, and breath on impulse and let their trigger finger “bounce” with the trigger, which should not be the case. Everything should remain the same before and after a shot in order to sustain accuracy.

Enter the follow-through, a fundamental that’s often skipped by new shooters but is still a vital point, especially for those who need to continuously fire under pressure. An easy way to follow-through, aside from maintaining the stance, grip, and breath, is to keep the trigger squeezed two to three seconds after a shot. Those few seconds will allow both the shooter and the gun to become steady for the next shot.

Mastery of the Fundamentals

Learn and master these five fundamentals for improved accuracy in shooting. For an easier time in understanding these, just remember to stand (stance), load (ammo), grip, breathe, shoot, then hold (follow-through).

And remember also that accuracy is everything. Big guns don’t mean much if they can’t hit anything. It’s how they are used that matters. Be accurate; be lethal.

Use promo code and get discount. -40% for early bird ticket at Blockchain & Bitcoin Conference Turkey.

Driving Under the Influence – What does it mean in Virginia?