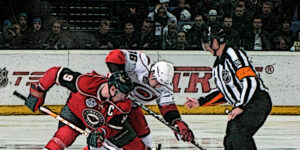 Cometh the winter, cometh the love for ice hockey. All over the world, nothing can match the adrenaline rush and emotions that National Hockey League generates. Currently running in its 99th year, this celebrated league of 30 teams from USA and Canada, has already headlined the major sports events and is conquering newsrooms, papers, periodicals and even the Internet.

With the regular season’s commencement right at the block the Oilers have already started with the game of getting the best combination for the team. In a bold move, winger Nail Yakupov has been traded to the St. Louis Blues by the Edmonton Oilers. In return, the Oilers would get Zach Pochiro and a 2017 conditional third round pick. The Oilers haven’t won the Stanley Cup since 1990 and would want their golden days to come back again as they open their regular campaign against Calgary Flames.

The defending Stanley cup champions, Pittsburgh Penguins would definitely be feeling the pressure to repeat their last year’s stellar performance. NHL predictions of having a great season for this Penguins are optimistic, courtesy the strong experienced line of players and coaching staff.

Irrespective of the fact that how amazing the roster is or how many rookies does one team have, the risk of injuries would always haunt the team management. Calder Award Trophy winner Jonathan Huberdeau of Florida Panthers has been forced to stay off the ring as he suffered a leg injury in an exhibition game against the New Jersey Devils. It would take at least 3-4 months for this hockey star to get back into the game.

With this, Florida Panthers joins Los Angeles Kings, New York Islanders and St. Louis Blues who have already taken the toll of having one or more players injured and out for some time.

Along with the star players, this season would also be a revelation for a lot of players. Good ones will try to achieve the legendary status and new players would seek to establish themselves. So, who are the players to watch out for an awesome hockey experience this season?

San Jose Sharks’ defense spearhead Brent Burns would be top this list. A well experienced player, Burns would be seeking to create a more awesome space for himself so that he could let the Sharks grab the Stanley Cup this season.

Just like SJ Sharks have high hopes on Burns, the current champions, Penguins, being no different would be expecting a lot from Sidney Crosby. Always exciting to watch, Crosby did some wonders last season. Let’s find out what surprises does his stick holds this season.

Coming to the younger generations, London Knights’ co-captain, Mitchell Marner who has been drafted to Toronto Maple Leafs, has set high expectations.

Marner, who consistently has been prolific in his gaming style, will be a key player to steer the Leafs up in the season.

19 year old goaltender, Ilya Samsonov would be having a lot of expectations this season as he plays for the Washington Capitals.

Rookies, legends and en route to legends, this NHL season is going to be a hell of an excitement magnet for fans all over the world.

Big-I the wannabe R2 is getting funded