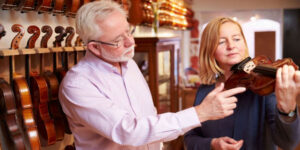 Music is the language universally understood by everyone across the globe. It is a source which adds the humans from different races and ethnic backgrounds in a single thread. Music is a part of everyone’s life, though its role varies from person to person. While some people only listen to music, some produce music and play songs themselves. In one way or the other, music has a part to play in everyone’s life.

When a beginner wishes to learn a musical instrument, it becomes a difficult call that, which instrument out of so many available across the globe, should be chosen. So, let us give you some of the most popular musical instruments for beginners.

A musical instrument of great versatility, it is suitable for anyone above six years of age, mainly because of different sizes it comes in. The size varies from normal length to one-sixteenth part of the normal length, thus giving you an option to choose one based on your comfort. Apart from that, the instrument is easy to learn and has ample use in modern music, thus giving you an option of making a professional career out of it.

Cello is another instrument which is suitable for the beginners, though it does not come in as varying sizes as the violin. The instrument is similar to violin in many ways, as it is played with the help of rolling bow on the strings. The cello is larger in size in comparison to violin, and is placed between the legs before being played unlike violin, which is played on hand. The cello comes in range of full size to one-fourth of the full size, so that you can use a suitable variant as per your will. At the same time, it is easy to learn and can be later be groomed as a skill for professional career as well.

A compulsory member for jazz shows, double mass is certainly not the most famous of the musical instruments in the list. Although the method of playing the instrument is almost similar to both violin and cello, by rubbing a bow on the strings, there are many differences too. Firstly, the double bass is very big in size in comparison to cello and gigantic in comparison to the violin. Also, it is suitable only for people above 11 years of age, not a good choice for the youngest music learners. Double bass also comes in range of varying sizes from original to one-fourth of the original size, with many options in this range. It is not a very popular instrument but is an integral part of jazz orchestra because of the unique effects produced by pulling the strings in various ways. If you have love for jazz, this is certainly the instrument you should look forward to as a beginner.

There are more than one qualities of flute which make it one of the most suitable instruments for the beginners. Firstly, it is the smallest and most easily portable instrument of all the instruments in the list. Secondly, it is affordable and the cheapest instrument in the list too. On top of that, flute can be learnt very easily with certain dedication and is also fun to play. This is suitable for kids as small as six years of age. On top of that, this is a non-string instrument, thus reducing the chances of damage and maintenance cost. Because of all the above stated qualities, flute certainly ranks among top 5 in the list of most suitable instruments for beginners. You can see many such lists on instrumentinsider.com.

A fairly large and costly instrument in comparison to other ones in the list, Piano is played with the help of keys on the keyboard. It is one of the most versatile musical instruments ever made and is used in almost all types of music and in all genres. It is fairly hard instrument to master but sounds great and is a great choice for the beginners. You can sit and play this instrument, so the load and size does not make a difference. Anyone above six years of age can play the instrument easily.

One of the most popular instruments ever made is guitar, a string instrument play using guitar pick or fingers. It is fairly easy to learn and comes in varying sizes. Acoustic guitar is most suitable for beginners.

These are some of the most popular musical instruments, which is suitable for beginners to get a taste of music. You can play any one of the above instruments and connect yourself to music.

Why Thailand Is Such a popular Moving Destination