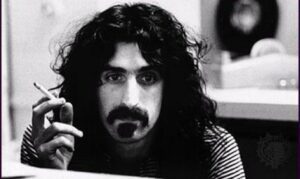 We’re still hoping for another Bill and Ted movie one of these days, but in the meantime, Alex Winter is tackling another great project, a documentary about Frank Zappa.

Zappa passed away in the early nineties, and it’s a shame he left us so young, because the world still needs his irreverence and right on target observations of life. Thankfully, Winter is planning a documentary that Variety tells us has the backing of the Zappa family, and should hopefully be out in the world in 2017.

As Winter said, “There has yet to be a definitive, authorized documentary on the extraordinary life and work of Frank Zappa. I am beyond thrilled to be embarking on this journey. Our tale will be told primarily in Frank’s own words; he will be our guide through this journey.”

Dweezil Zappa started performing his father’s music because he was afraid that it would go forgotten. That thankfully hasn’t happened, as Zappa always had a hardcore underground following. With today’s generation not knowing anything that’s older than five minutes ago, it’s great that Winter will help remind the world at the musical brilliance of Zappa’s work.