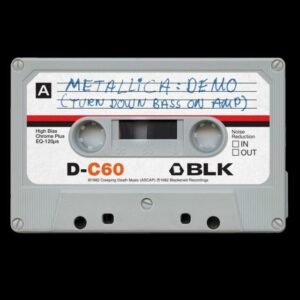 Way back in the day before we even had fax machines, Metallica got the word out through audio tape, with fans duping copies, and trading it through snail mail. As a later generation metal tape trader, it was great fun to get new bands in the mail, and help spread the word about bands you dug.

With the success of the Guardians of the Galaxy soundtrack, audio cassettes are actually popular again, and as Blabbermouth tells us, nearly three thousand copies of Metallica’s No Life Til Leather demo sold, on audio cassette, within two days of release, April 18 and 19.

This demo is an exact copy of the original that went around to fans, and it was molded off Ulrich’s personal copy, which has his handwriting on the label and the j-card. (I love the warning where Ulrich wrote under the title: Turn Down Bass on Amp.)

This release also came out through Metallica’s new label, Blackened, which will release the band’s next album, whenever they get around to recording it. Funny enough, Metallica’s Leather demo wasn’t the number hit of Record Store Day, it was The White Stripes Get Behind Me Satan. Still, an audio cassette reaching the top of any big music chart is really a trip, and although you can download the Leather demo on YouTube, having a physical copy is a neat little memento of another era in underground metal.