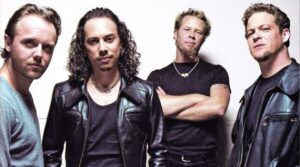 As Metallica fans and long time TG readers know, the band’s No Life Til Leather demo is now being reissued for Record Store Day on April 18, and it’s coming out on its original format, cassette. Believe it or not, cassettes are coming back, like the Guardians of the Galaxy mix tape.

Lars Ulrich recently looked back on the demo in Rolling Stone, and that it was a document of the band’s “crazy, fun first year.” Ulrich delivered newspapers at 4 in the morning to make money when he was in his last year of high school. The rest of the time, he would hang out with guitarist Dave Mustaine and original bassist Ron McGovney, “and then we would just play and write and sit around and drink beer and listen to metal records.”

Metallica of course didn’t fit in with the hair hands that were starting to gain traction in L.A. at the time, “But there was a unity in what we were doing, and it was a lot of fun. We were all equally outcasts, loners and metalheads. There was strength in that.

“The No Life Til Leather stuff just sounds so effortless, like it was all put together in an afternoon, which it was.”

Now about that new album, which everyone keeps pestering them about, Ulrich said, “The creative elements are close to being done. But remember, this is still ‘Metallica time.’ When I say we’re close to being done, it means the next month or so. But we are certainly down there [writing] pretty much every day. We are f*cking in it. We’ve got lots of songs, and we’re honing them and tweaking them. It’s pretty close.”