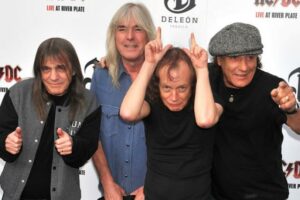 AC/DC is one of those bands that don’t really need to put out new albums. They have a great catalog of material, when you see them live they mostly do the old classics anyways, and their live show is still enormous fun. (One of the best bands I’ve ever seen in concert, hands down.)

There’s been speculation for years about how much gas AC/DC still has left in them, especially considering rhythm guitarist Malcolm Young, brother of Angus, has reportedly been ill. (A band statement to Rolling Stone said he won’t be returning to the group.) Despite losing one of their most crucial members, the band has a new album coming out, Rock or Bust, on December 2.

Other reasons bands shouldn’t put out new albums we should mention…Nobody buys music anymore, and past a certain point the fans just want to hear the old sh*t anyways. Still, AC/DC have been famous for sticking to their guns, and their last album, Black Ice, got good reviews.

Granted, it won’t be a huge step forward artistically. When you buy an AC/DC album, you know what you’re getting, which should always come as a relief. The band never tried to be new wave, disco, nu metal, punk, or any other trend that came along, and you gotta admire a band that’s always been so true to themselves. They may never put out an album as great as Back In Black or Highway to Hell again, but it’s nice to see they’re still out there doin’ it after all these years.

Enjoying the Glory Days of SNL

Is Apple’s Beats Going Out Of Business?