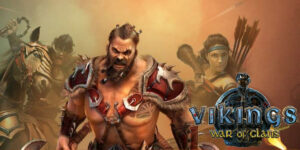 Vikings: War of Clans is a 3D clan strategy game from Plarium, which is also known for other similar strategy games like “Total Domination” or “Sparta – War of Empires”. Although the story is set in ancient Viking times, the graphics still have a modern and satisfying look to them.

You start the game as the Jarl of a Viking village. The game guides you through the initial steps of adding buildings, training soldiers and gaining resources. After that, you have a basic idea of what you can and should do.

The first few levels are for building up resources and upgrading your buildings and troops. The real action starts after you have reached the fifth or sixth level and joined a clan.

When looking for something comparable to Vikings, one of the first, famous, games that jump into mind is Clash of Clans. The general idea and concept might be similar but Vikings is far more complex. Unlike C of C, and most other strategy games, you have a lot of freedom in what you want to do, how you want to do it and the pace you want to go.

Vikings is not a linear game, it is very complex, with loads of options and an array of resources that you have to keep an eye on. It will not be possible to cover everything in one article, so we will not even try. Just a look at all the different troops you can train will give you an idea on what to expect.

Nearly every mobile game has in-app payments nowadays, be it an arcade game like Candy Crush or a bash em up game like Justice League. If you do not want to wait or if you want some fun extra features, then you have to pay. Vikings is no exception but the first positive thing I noticed about this game, is that you can play for quite awhile and achieve quite a lot without having to pay. You can enjoy the game without immediately having to pull the credit card.

Vikings: War of Clans has everything a good strategy game needs, the graphics are good, you have the classical city building options, a large choice of units to train to send to war, you can join clans to conquer Places of Power and improve your ranking, and customize your Hero with achieved skills and self-tailored armor.

The mobile app can be overwhelming with all the information and options that it offers but the menu is well structured and easy to use. Fortunately, there is a Facebook app for desktop browsers, which is still in Beta, but once it is stable you can seamlessly play on the go or comfortably on your laptop.

All in all Vikings is worth the try for strategy game fans.

For more information, you can read this Wikipedia article.