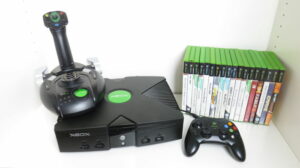 Have you recently acquired the amazing Xbox One and a few exciting games to go with it? I know you can’t wait to have a go, but you might one to throw in a few optional accessories so you can enjoy a spectacular game time!

You can various affordable gadgets in your online or offline store to enrich your gaming Xbox experience, from seeing new movies, to chatting with friends and meeting new people, as well as special accessories to give you the ultimate game time.

Sometimes, hashing out text messages on the Xbox One controller just won’t cut it. You need a keyboard to send messages to your friends, or typing in one of those really long 25 character redemption codes. This is where the Xbox One Chatpad comes in handy.

The Chatpad is a small QWERTY keyboard that fits to the bottom of the Xbox One Controller. You can easily send messages to fellow gamers, even in the dark – thanks to the backlit on the mini keyboard. It does appear a bit difficult to use at first but you’ll get the hang of it after a while. There are several cheaper models in the market. However, the official Microsoft version provides better quality and guaranteed compatibility.

If you’re in the market for another Xbox One controller, then you’re better off getting the official Xbox One Controller. Microsoft did a wonderful improvement on the Xbox 360 controller which is widely accepted as one of the best gaming controllers available.

The asymmetrical sticks and directional buttons are the same on both controllers but the Xbox one is sleeker and provides a better feel. One striking feature is the haptic feedback in the triggers. Gamers can actually feel the action right in their fingertips, and this can make a big difference in your Xbox One controller gaming experience.

The Xbox One is much more than a gaming system; it’s also a full featured media device where you can stream hundreds of videos and music. It also has the ability to play DVD and Blu Ray movies. To completely control all these features, you need more than the standard controller. For a more effective, yet simpler control, the Xbox One Remote Controller is a must have.

This affordable remote controller gives you full control over Netflix, YouTube, Blu Ray, WWE and any of the dozens of entertainment apps available. The controller is perfect for handling any command and has backlight which makes it suitable for late night videos and home theaters.

While there are people who are only concerned with the graphics of the game, there are gamers who need the sound as much as they need the picture. Xbox headset allows you to experience the crisp sound straight into your ears, and you don’t need to run an audio cable as it plugs straight into the Xbox One Controller.

However, while the original Xbox headset doesn’t shirk on performance, it’s pretty standard and may not satisfy game enthusiasts who need the best sound for an all round experience. If you need something with more noise cancellation, surround sound or mic monitoring, then you may need to consider other options. Take a look at our roundup by Gadget Review of some of the best Xbox One headsets available for your console.

It takes just a few games to fill up the 500GB internal memory most Xbox One games come with. While this storage size might be okay for most users, it just will not cut it for ardent gamers. The good news is that you can easily and quickly scale up the size of your Xbox One storage with an external USB hard drive while still using the game’s internal storage device.

We suggest Seagate’s game drive for Xbox. This small, reasonably priced storage device comes in an impressive 2 terabytes capacity, enough space to store all your games and recorded multimedia. Besides its sleek look, you are sure of a device that would work straight out of the box with zero hassles.

Most gamers overlook this because it is not a physical accessory. However, Xbox Live Gold Membership is probably one of the most important add-ons for your Xbox One. If you want to enjoy the complete gaming experience, then you need to try playing with friends online. Xbox Live Gold Membership makes this possible. And even if you don’t play with friends, there are still tons of benefits that make this add-on invaluable.

Xbox Live Gold Membership comes with lots of free Xbox One games (and a few that are compatible backwards with Xbox 360). And you get to keep these games as long as your membership is valid. There are just so many free games loaded on this platform every month that you may never need to buy a new game.

Xbox One has a lot of awesome racing games such as Forza series, Dirt rally and a host of others. While the standard Xbox controller will do just fine, for a full racing experience, you need something like the Thrustmaster Racing Wheel. The wheel and its pedals offers full motion control and active feedback so that you can feel every bump and slip that your tires make. This provides a really immersive racing experience. Another exciting feature of this accessory is the brake pedal which boasts a progressive resistance. This means that the more you press on it, the harder it gets, just like a real mechanical brake on a car.

Xbox One Play and Charge Kit

Even though the Xbox comes with affordable battery options, it can be a real hassle switching batteries on your game controller every other week. If you;re looking for simplicity and functionality, the Xbox One Play & Charge Kit meets the bill perfectly. It helps you save money on AA batteries for your game controller as you can use a micro USB cable to keep the juice running in your Xbox One controller while playing.

Do you have any other favorite Xbox One accessory you think deserves a mention in this list. Please share with us in the comments.

5 Good Reasons To Rent a Villa in the Caribbean