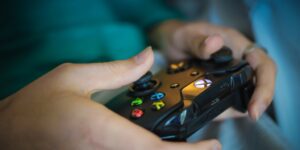 We all know that there are many fantastic games that you prefer to play alone. These are often epic RPG games like Mass Effect, as you’re required to explore the worlds and take your time over several weeks. However, there are other games which are simply made for gaming with your friends!

These are the types of games that are shorter but usually more action-packed and fun – perfect for a party. So, if you’re on the lookout for some video games to play with your friends, then consider some of these options.

It’s been a classic party game for a long time, but for good reason. Mario Kart is a hugely entertaining and fun racing game whereby anyone can feel like they’ve got a chance to win. Due to those pesky blue shells and stars, a player can often come from 8th place to 1st to take the win! The tracks are always wild and provide a lot of laughs.

The clue is in the title! Mario Party is very different from Mario Kart, but still retains the amusement and hilarity of the racing game. Often a game where simply mashing buttons and running around eagerly can mean the difference between a win and a loss, Mario Party is a game that can be played all night if needs be.

True, Minecraft might not have the immediate fun factor of a game like Mario Party, but once you’ve learned the rules and understood what all the buttons do, this is a very rewarding game that you and your friends can have endless joy playing. Some prefer to play on their own, but Minecraft is best when you’ve got people you trust around you, as together, you can build incredible structures and live in a virtual world of your own design. It’s common to buy your own gaming server via one of these packages so that you can dictate the rules and decide who gets into your faction.

Halo just keeps getting better and better. From the original self-titled game to Halo 5, the multiplayer section of the FPS has seen some incredible changes over the years. Only the best survive in Halo, but if you don’t take it too seriously, then it’s an amazing game simply to have some fun in while you get lost in the immersive levels.

Like Halo, Call of Duty has been a staple FPS for multiplayer gaming for a long time. Although there are some players who like to ‘camp’ (sit in one place and pick people off, usually with a sniper rifle), the real fun begins when you are engaging in epic shootouts and dodging your way through gunfire. If you’ve got a quick trigger-finger, you’ll do well in Call of Duty.

Another game whereby button mashing can sometimes work to your advantage! Mortal Kombat has some colorful characters, cool weapons and special abilities, plus some very, very competitive gamers! What seems like a bit of fun at first can quickly turn into a rivalry, so be warned!

Worms is easy-going and simple to pick up, but hugely addictive once you understand what each weapon does. Worms requires a bit of strategy and thinking, but if you’re always one step ahead of your opponent, you’ll find yourself the winner soon enough.

A flaming ball? Slam dunks from the middle of the court? It can only be NBA Jam. This is not a serious basketball game by any means, but what it lacks in realism, it more than makes up for in entertainment. If you can pass and shoot, then you can play NBA Jam.

Things can get a little crazy in GTA, but when you’re playing online with your friends, you’re there to cause a little bit of mayhem and not play by the rules. Whether it’s stealing cars from innocent drivers, having shootouts with the police, or parachuting out of a helicopter, GTA gives you a license to go wild.

Ever wanted to start a band with your friends but don’t know how to play instruments exactly? Band Hero gives you the possibility. With drums, guitar, bass guitar, and a microphone (all not full size, of course), Band Hero is like karaoke but far more interactive. With some of the best pop and rock songs of all time on the roster, Band Hero will have you rocking out until the morning.